It is a fact that animal poop is endlessly fascinating (if a little disgusting!). The color, shape, and contents of animal feces can indicate which animal it belongs to, and what its diet is made up of. If you’re a keen nature lover or simply a curious mind, you may have come across the droppings of various animals and wondered what left them behind.

If you’ve ever parked your car under thick trees or bushes for some time, you may be dismayed to return to it covered in white blobs. Or perhaps you have seen seacliffs plastered with white splodges and wondered how this came about. These “gifts” belong to birds – but why is bird poop white?

Here, we’ll discover why most bird poop is white – what makes it this color? We’ll focus on fascinating aspects of birds’ diet, digestive systems, and anatomy in order to uncover this mystery.

Why Is Bird Poop White? 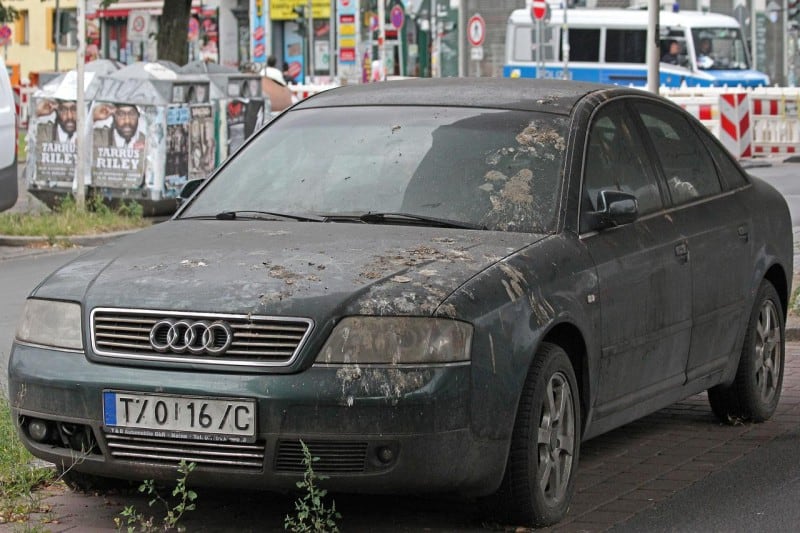 Let’s start off by saying that bird poop isn’t always white. It can come in many shades – black, brown, red, purple – depending on what the bird has eaten and whether the food item is rich in pigments. However, bird poop is usually white. But why is this, when most other animals’ poop is brown?

First, we need to learn a little more about bird anatomy…

Birds, unlike mammals, do not have separate organs which are responsible for storing and removing waste products. They also do not produce urine. So how do they get rid of the nitrogenous wastes that their bodies do not need or cannot process?

Birds get rid of this waste through the cloaca. This is an opening which serves as the exit for waste products, as a reproductive tract, and for laying eggs. Both males and females have a cloaca (although only females lay eggs!).

Other animals which possess a cloaca include amphibians, reptiles, elasmobranch fishes (for example sharks), and monotremes (egg-laying mammals, such as playtpuses).

The kidneys of a bird produce uric acid (also known as guanine, which gives the alternative name guano to bird poop) as opposed to the urea produced by the kidneys of mammals. As uric acid is only partially soluble, it is excreted from the cloaca as a white, paste-like substance. This is the equivalent of urine.

As all waste products are excreted together, this white uric acid paste often surrounds the actual poop which is usually a darker color. However, they can also be found separately, as feces is produced first and subsequently “capped” with the uric acid.

One reason for the prodcution of uric acid lies in the fact that birds are born encased in hard shells. All animals metabolise, and chicks are no different. They need to get rid of the metabolic waste they produce. This is easier for baby amphibians and repltiles whose egg shells are semi-permeable. But chicks excrete this waste into the eggs they are trapped in. Urea would eventually poison the vulnerable chick inside the shell. However, uric acid is non-toxic, making it harmless for baby birds.

The uric acid helps birds to reduce water loss. Mammals need to drink a lot of water, and then excrete much of that water as urine – around 95% of mammal pee is made up of water. Humans excrete between 0.5-2.5 litres of water in urine every day. If less than this is consumed, the urea is highly concentrated and a person will begin to have serious problems starting with dehydration and leading onto kidney failure.

Birds require far less water thanks to their ability to produce uric acid.

Because they are not carrying around all that water, this trait allows birds to fly around as lightweight as possible. They have evolved to streamline – to reduce their weight. Often, they will defecate just before taking flight from a branch, helping them to lighten the load and fly unencumbered!

This is particularly important for migratory birds who may not have any access for water for long periods of time.

Protein In The Diet 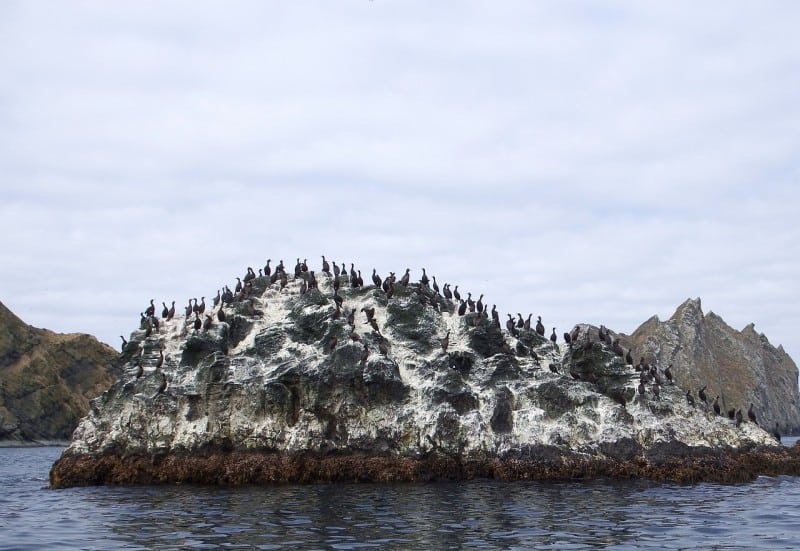 The whiteness of bird poop can be partially due to the proportion of protein in the bird’s diet. Hence, some bird species are more likely to produce whiter droppings compared to others. For example, seabirds have a diet packed with protein from fish, crustaceans, and other aquatic invertebrates. This causes them to produce large amounts of bright white uric acid deposits, and very little darker-colored poop.

This can lead to bright white dyed cliffs where seabirds such as guillemots nest in vast colonies.

Bird species which eat a less protein-rich diet will produce less uric acid and more actual poop. This may be colored black, brown, or even red or purple if the bird eats a lot of berries and fruits.

The poop, or guano, of some bird species is widely used as a fertilizer. For example, “cormorant rice” found in one area of Japan was given its name due to the unusual fertilizer that is applied to the rice paddies – cormorant poop! Due to their high-protein diet of fish, and close nesting proximity to the paddies, the cormorants helped the rice to grow healthy and strong.

In fact, whole industries have been formed around this nutrient-rich substance. Guano is typically rich in nitrogen and phosphorus – two nutrients that are essential for plant growth and help farmers to obtain a good crop yield. In Peru, farmers have been applying guano for over 2000 years. People have appreciated the qualities of guano as a fertilizer throughout history, it was even mentioned in the bible.

More recent studies have attempted to evaluate the monetary value of guano. One study found that the guano of seabirds only could be worth as much as $473.83 million USD per year!

Placing a figure on the economic value of bird guano could have multiple benefits. As well as utilising this natural fertilizer, thereby cutting down on the production of synthetic fertilizers, this effort can help raise awareness for seabird conservation. Many bird species worldwide are under threat from multiple dangers including habitat loss, over-fishing, and pollution. Valuing them more highly through valuing their guano can only be a good thing.

Why is pigeon poop white?

Like all other birds, pigeons produce both uric acid (the pee) and feces at the same time (or sequentially) from their cloaca. Pigeons feed on pretty much anything they can find. This often includes insects, invertebrates, plant matter, and food scraps in urban areas. Diets high in protein are more likely to produce whiter poop. So if you see a lot of white pigeon poop this can indicate the pigeons have a diet rich in protein.

Why is bird poop white and black?

The white is the uric acid – the bird version of urine. The black is the feces. If the actual feces is black in color it is either because it is dry, the bird has consumed dark-colored foods such as beetles, or there is something wrong with the bird. Black poop in captive birds can indicate blood in the feces which suggests the bird has health problems. If your captive bird has very dark black poop you should get it checked out.

Why is bird poop white and brown?

Again, the white is the uric acid – the bird version of urine. Brown is a perfectly normal color for bird poop and is produced by a range of components in a normal bird diet. A healthy captive bird is likely to produce poop colored from brown to green according to its dietary components.

Why is bird poop considered to be good luck?

It is a strange belief that has formed around bird droppings – that being pooped on by a bird is a sign of good luck. It is unclear where this belief stemmed from but perhaps it was to counteract the unpleasant feeling of suddenly being pooped on by a bird! Be sure to wipe the mess off as soon as possible (good news – wiping the poop off does not remove the good luck allegedly!).

However, not everyone considers bird droppings to carry good luck. There is an old myth in Britain that states that being pooped on by a rook is a sign of punishment, and that one should repent for something one has done.