Birds are fascinating creatures with a great variety living all over the world. They are some of the easiest wild animals to observe and it can be incredibly rewarding to spot a flash of eye-catching plumage or hear a musical chirp.

Whether you’re kitted up with binoculars, or simply wondering around your neighbourhood, it can be a confusing process trying to identify the different feathered friends you catch sight of day to day. To add additional confusion, many birds of the same species look different – this could be a difference between genders, ages, or location.

Perhaps you have spotted a flash of yellow and black whilst out on a walk? Or flitting around the shrubs in your garden? You may have sighted one of the yellow birds with black wings on our list today, especially if you are based in North America. We aim to help you identify and learn a little more about this stunning category of birds. We’ll look at some prime examples living in North America, as well as a few examples elsewhere in the world. We’ll also discover why they possess bright yellow tones, and the possible reason for their dark black wings. Let’s swoop right in…

Yellow Birds – Why Are They So Yellow!?

There are very many yellow birds in North America in particular. Excitingly, several of these are commonly seen in backyards and public spaces, visiting birdfeeders and conducting their daily activities.

But why are some birds colored yellow? What creates these eye-catching plumages? Well, yellow coloration in birds is due to carotenoids in the food they ingest. Carotenoids are a group of pigments produced by plants. Birds receive these pigments directly through eating plant parts including berries and seeds, or through preying upon insects and invertebrates that have themselves ingested plant materials.

Usually, carotenoids are fat-soluble and processed in a bird’s liver. They are then transported via a bird’s bloodstream and eventually deposited in the follicles of feathers. Here, they crystallize and will produce different colours depending on whether they mix with other pigments or not. Pure carotenoids produce yellow, orange and red coloration. Carotenoids mixed with for example melanin pigments will produce green shades. (Read more about birds and pigments here!)

Why Do Some Birds Have Black Wings?

Similarly to the mechanisms creating yellow coloration in birds, there are some specialised pigments creating black coloration in feathers. It is primarily melanin that is responsible for black, gray and brown tones. Feathers that are purely black contain melanin in both the core and cortex of the feather.

Depending on the type of bird, and the type of scientist you talk to, there could be multiple different evolutionary reasons for black coloration in bird wings. We’ll take a look at a couple that have been well-researched here:

We’ve taken a closer look at why some birds are yellow, and why they may have black wings from an evolutionary perspective. Now let’s focus on some stunning examples of yellow birds with black wings… 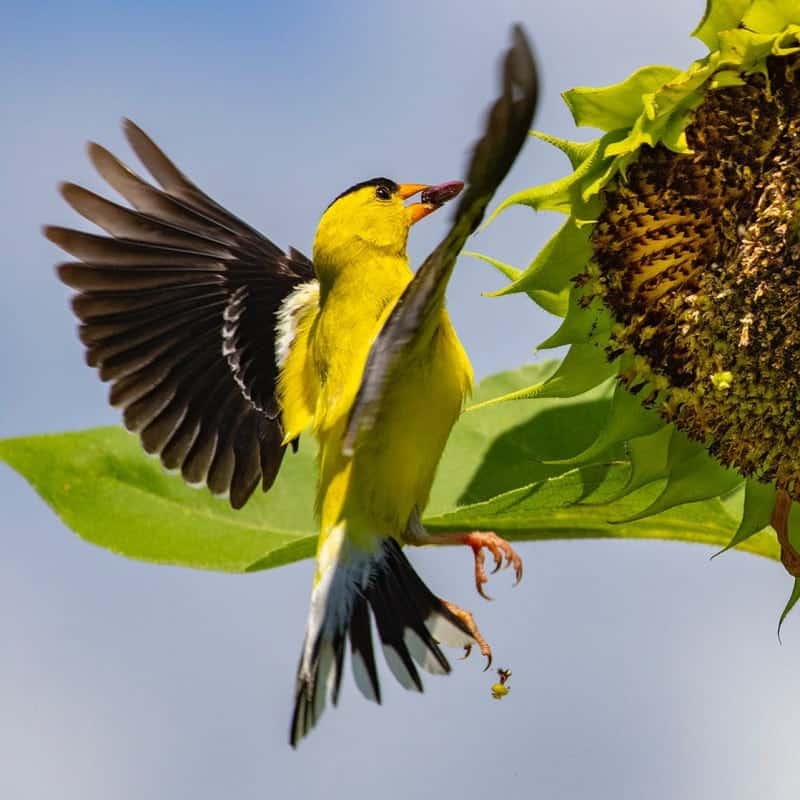 If you live in the United States, this is one of the most common yellow birds you might find visiting your backyard. American goldfinch breeding males boast the brightest yellow body with contrasting black wings. Breeding females and non-breeding males tend to be a duller yellow with some browner coloration on the body and wing feathers tipped with white.

This species is notable for its acrobatic nature, clinging to seed heads, branches, and thin stalks to access food. They sometimes forage in large groups, often around bird-feeding stations. The American Goldfinches’ primary habitat is floodplains, open woodland areas, and scrubby fields. 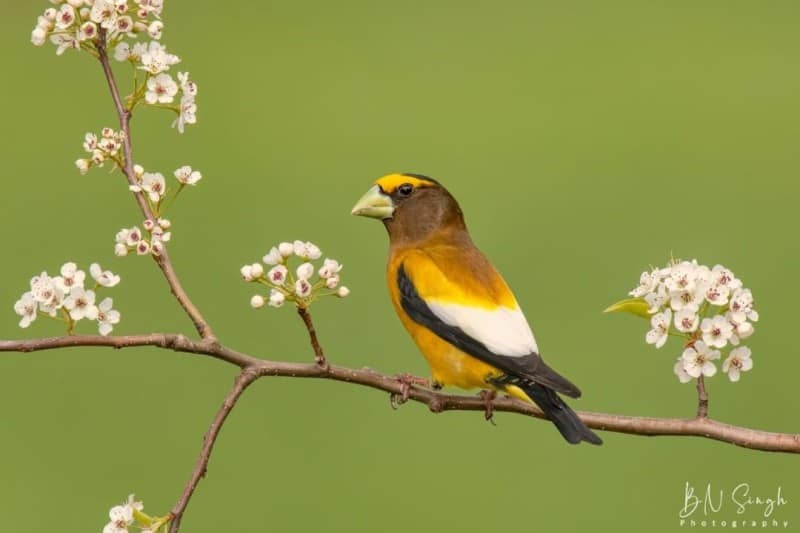 The Evening grosbeak is around double the size of the American goldfinch. It has a stockier appearance complete with a strong, stumpy bill. Again, it is the males who sport sunflower yellow bodies (coincidentally they also love sunflower seeds! This can be a good way to attract them to your garden) with dark black wings and tail feathers. Females and immature males have greyer bodies, sometimes with yellow patches, and black and white mottled wings.

This is another species that can be found across the United States, but it is classed as Vulnerable by the IUCN due to rapid population decline. The chosen habitat of the Evening grosbeak is northern coniferous forests, usually at higher altitudes. 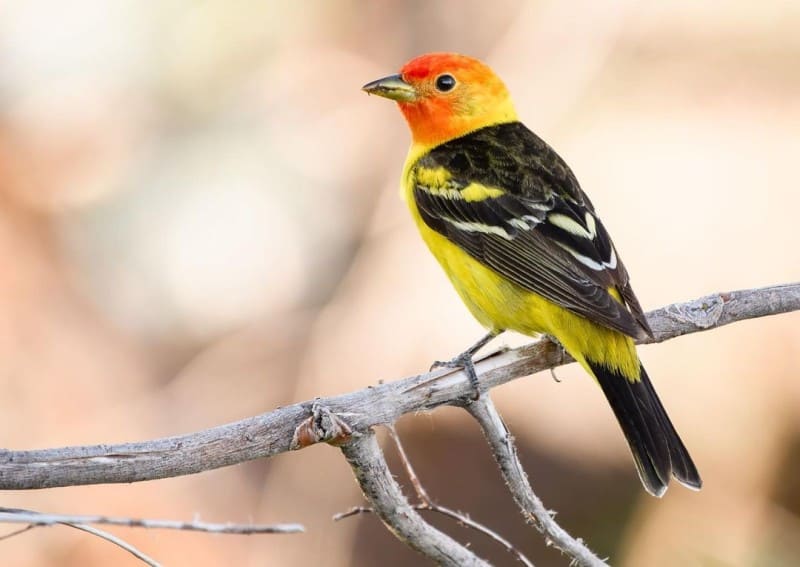 The male of this beautiful species is distinct on this list for its tangerine orange head. The rest of its body is bright yellow while the wings are a combination of black, brown and pale yellow. The females tend to be less eye-catching but still sport yellow coloration albeit duller and sometimes more green or brown than yellow.

Western tanagers have a broader range compared to the previous two species. They are spread throughout North and Central America and can be found mostly in coniferous or mixed forests, during both summer and winter they can be a quintessential woodland bird. 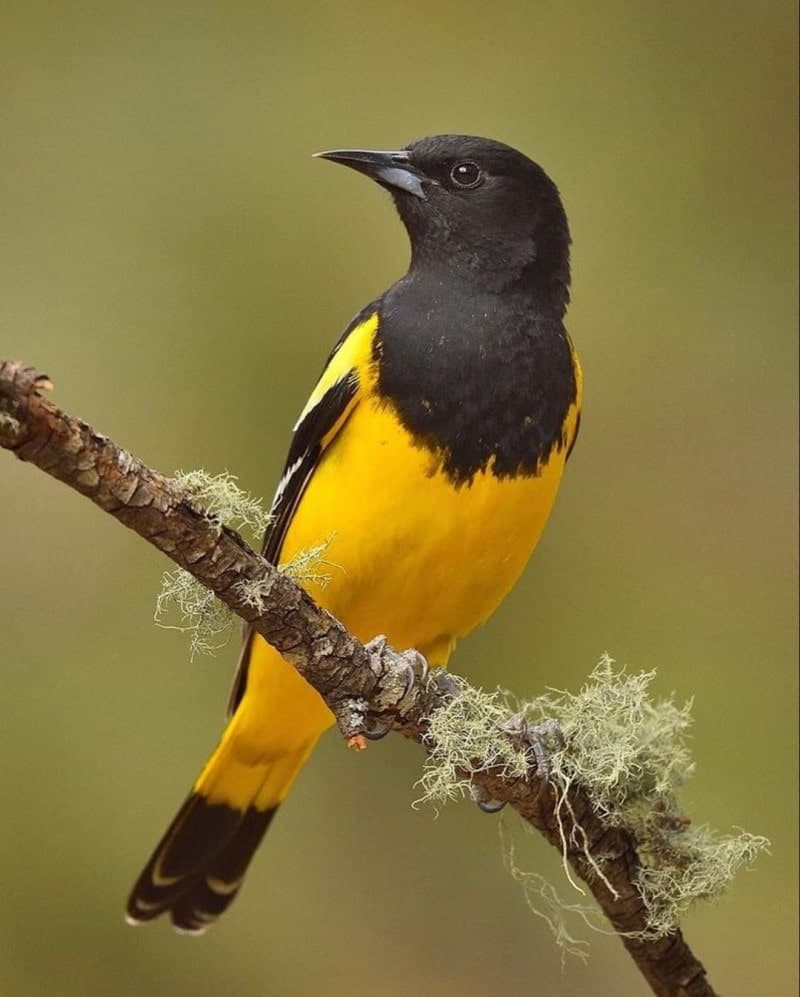 The Scott’s oriole can be found primarily in drier, desert habitats and close-by steep mountain slopes. It has a particularly strong association with Yuccas, using them to forage for nectar and inhabiting insects, and for fibers to build their nests. The nests are constructed on living Yucca leaves, hanging below them. It will also feed on fruits.

The males are mostly bright yellow, with inky black heads, and black wing and tail feathers with some white patches. Females also have striking yellow bodies, but with more olive-green wings, heads, and backs. Immature individuals are much duller with some mottled patterning on their backs. 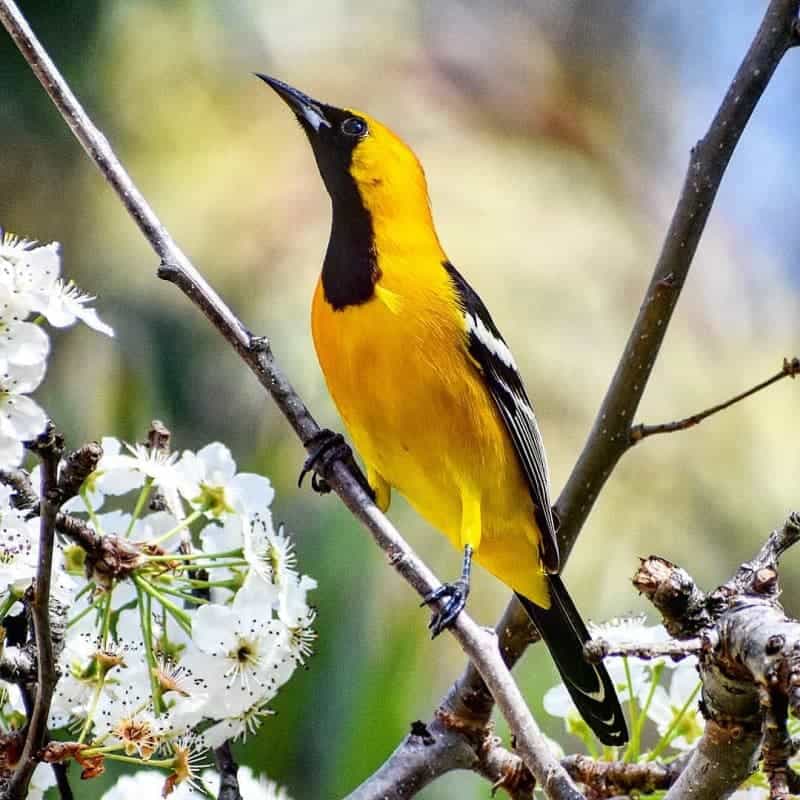 A slender and very elegant looking oriole species, the Hooded oriole tends to sport more orange-yellow plumage compared to the other birds on this list. It has a distinct, sharply pointed bill – black in males and more brown in females. The males tend to be more orangey than females with much blacker wings and tail fathers, and a black throat patch. Females have gray-brown wings and are mostly pale yellow.

In fact, coloration also varies by location: birds in Eastern areas (Texas to Yucatan peninsula) tend to be more orange whereas those further West are more yellow. They can often be seen close to human areas, especially those with palm trees. Hooded orioles use palm fibers to weave their nests onto the underside of palm leaves. 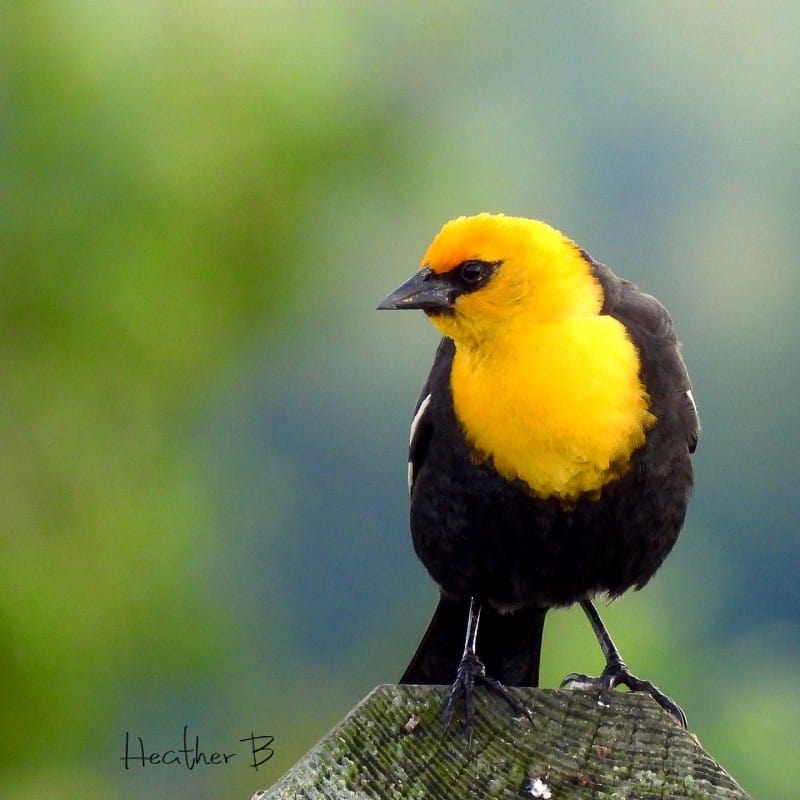 Perhaps boasting the most black feathers of all the species we have on our list today, the Yellow-headed blackbird is unmistakable with its vivid yellow head and chest. Again it is the breeding males of this species that sport the brightest yellow plumage, with females and immature males possessing browner plumage and mottled brown and yellow heads and chests.

The Yellow-headed blackbird can be found all over North America apart from the most northern regions, and over-winters mostly in Mexico. During the summer they can mostly be found inhabiting marshlands, foraging for seeds and grains on the ground in open areas. This species suspends their nests in reeds directly above waterbodies. 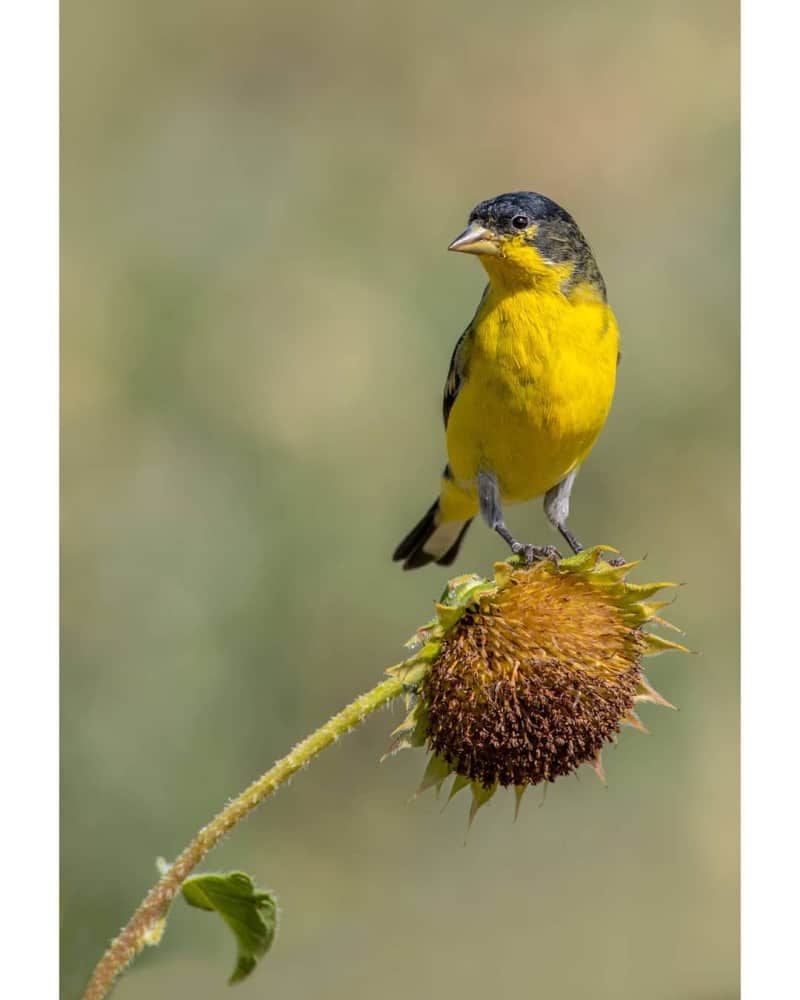 Although a little less striking compared to the American goldfinch, this species is still note-worthy for its lemon yellow body and patchy black wings. Breeding males tend to be more brightly colored while females and immature males are browner and usually have less black coloration on their wings.

The Lesser goldfinch is another friendly species that is often spotted feeding from birdfeeders in backyards through most of the United States. It also occupies areas of Mexico and norther South America. Individual males inhabiting areas from Texas to South America tend to have jet black coloration from the head, down the back and into the tail feathers. This species is usually found in scrubby areas of willow, oak and cottonwood, and feeds primarily on sunflower seeds. 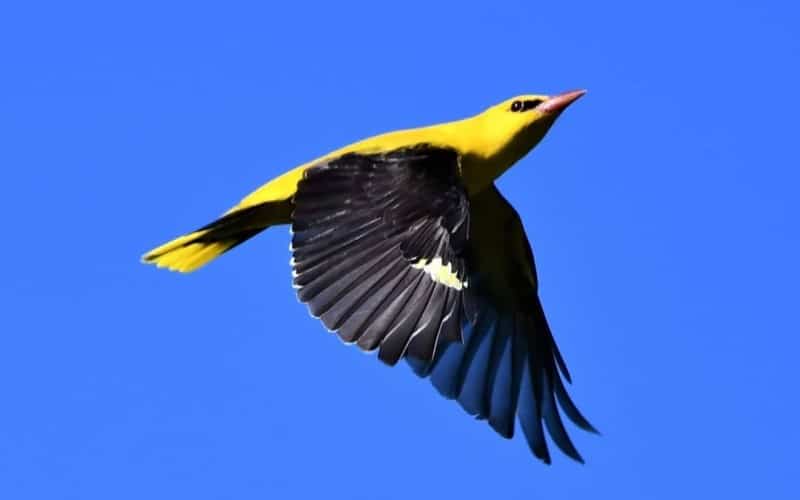 This striking lemon yellow oriole can be found across most of Europe, some parts of Asia, and some parts of Africa where some population overwinter. The Eurasian golden oriole breeding males have the most vivid coloration with contrasting jet black wings and a dark pink bill. Immature males and females are duller and tend to have more brown and gray wings. Sometimes they possess a speckled pattern on a paler breast and underbelly. Although their coloration is eye-catching, they can be surprisingly hard to spot due to their shy nature, quick flight, and tendency to hide in foliage.

This species can commonly be found in woodlands, orchards and parks, especially where there are deciduous trees and an abundance of fruit. 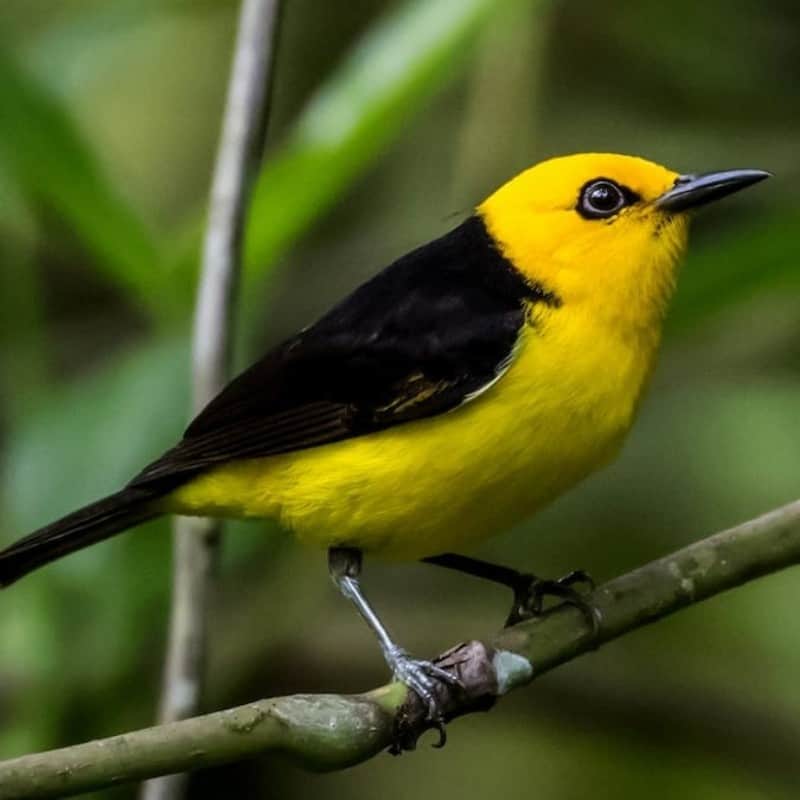 A tiny and distinctive species with well-defined blocks of color, the Black-and-yellow tanager can be found in select areas of Costa Rica and Panama. In fact, it is endemic to the mountainous area of these countries. Males are golden-yellow with jet black wings and tail feathers, and a black ring around the eye reminiscent of mascara! Females tend to have browner or grayer backs and wings compared to males, and lack the eye ring.

This species inhabits forests and forest edge habitats, sticking mainly to the canopy in large flocks. They forage for insects and small fruits which are usually swallowed whole. 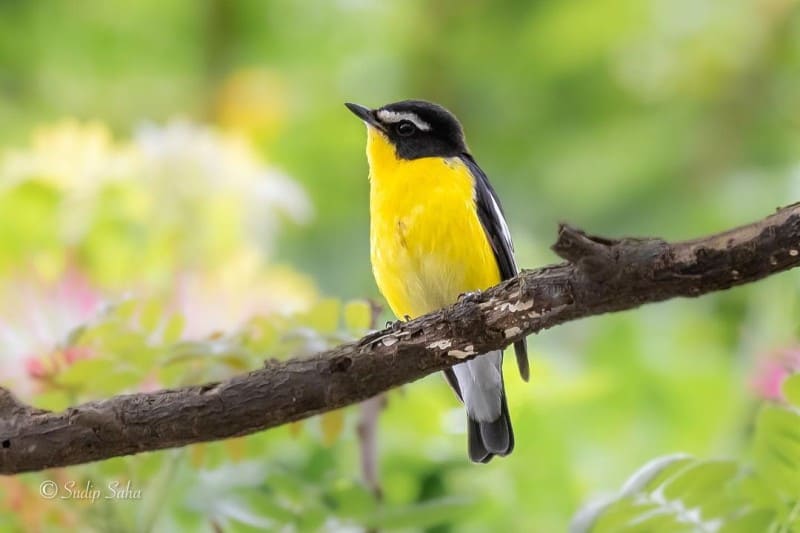 Also known as the Korean flycatcher or Tricolor flycatcher, the Yellow-rumped flycatcher can be found in parts of eastern Asia. While males sport golden-yellow underbellies, and dark black wings, tail feathers and head with distinctive white dashes, the females look completely different. They tend to have mostly brown plumage with a paler underbelly.

Yellow-rumped flycatchers can be found in a variety of wooded areas but particularly riparian woodland. Some populations will migrate and over-winter in India and Sri Lanka.

Why is it mostly male birds with brighter coloration?

You may have noticed in most of the examples above that the males sport the brightest, most eye-catching plumage while the females tend to be duller. This is common in bird species, and it’s called sexual dimorphism.

Usually this is because, in the bird world, males will display to females to try and attract potential mates. Then, it is up to females to choose the ‘best male’ (in terms of health and fecundity). In brightly colored species like all of those on our list today, the brighter the coloration, the healthier the male it belongs to. Brighter colors indicate a good diet (plenty of foods containing carotenoids) and great health.

Over time (and we’re talking an evolutionary timescale, millions of years!) this selection process (called sexual selection) has meant that male coloration has become more and more pronounced through generations of passing down the genes responsible for bright pigmentation.

This is a simplification but helps to explain why we see such a weird and wonderful diversity of bird species all over the world today!

10 Birds With Big Beaks: Which are the Most Spectacular Ones?