There are many weird and wonderful examples of mimicry in nature – caterpillars that look like twigs to avoid getting eaten, harmless flies that resemble wasps with nasty stings. But did you know there are flowers which look exactly like birds?

Before we uncover the mystery of plants which mimic animals, we first need to look at animals which mimic plants.

Throughout nature there are countless examples of animals which look like plants. This characteristic is often a survival tactic to avoid being eaten by potential predators and can include methods like:

One expert in blending into the surroundings is the Dead Leaf Mantis which closely resembles, yes, a dead leaf. They perch on the end of a twig and even sway in the wind to complete the illusion. Like a method actor, a Dead Leaf Mantis will fall to the ground and lie there motionless when disturbed, waiting for the predator to go away. 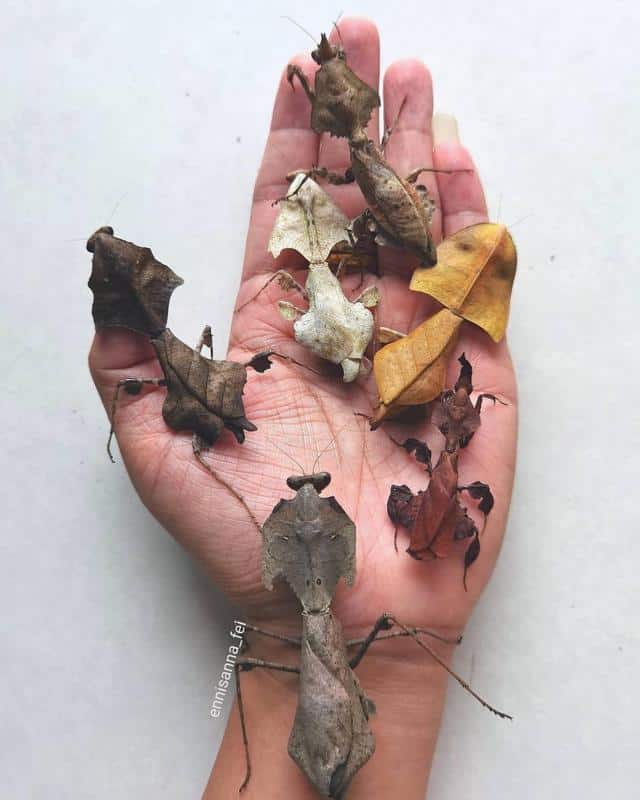 At other times, prey species avoid predators by mimicking other predators. This method can serve to threaten or surprise a predator when it approaches the prey. A good example is the Owl Moth which has striking, almost hypnotic eye-spots on its wings. Through resembling the staring eyes of an owl, the Owl Moth can frighten smaller birds which prey on moths, but are preyed upon themselves by owls. 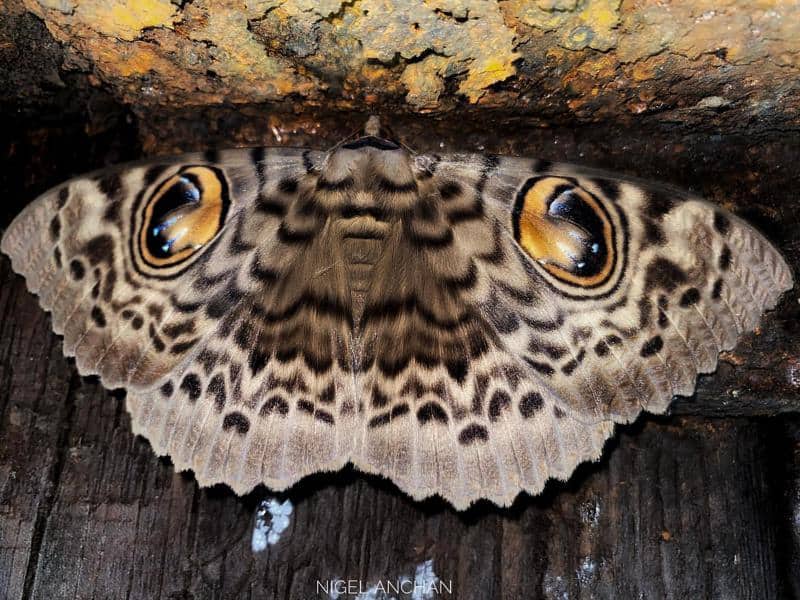 Now we turn to plants which mimic animals. How is this possible when plants cannot see animals? How do they know what features to mimic? And why is looking like an animal advantageous to plants?

Mimicry in plant species has not been as widely studied as mimicry in animal species, but plants may use mimicry in many similar ways including:

A mutualistic relationship in this sense is one where the plant attracts an animal to perform a service that is mutually beneficial to both parties. Most commonly this is the attraction of pollinators to flowers. Big, eye-catching blooms or strongly scents can lure in bees, moths, hoverflies, and even birds. Plants which require pollination rely on different species to visit flowers to feed on nectar, and spread the pollen from flower to flower of the same plant species.

In terms of flowers that have evolved to look like animals, flowers that look like insects are the most common. This technique attracts specific insect pollinators by: 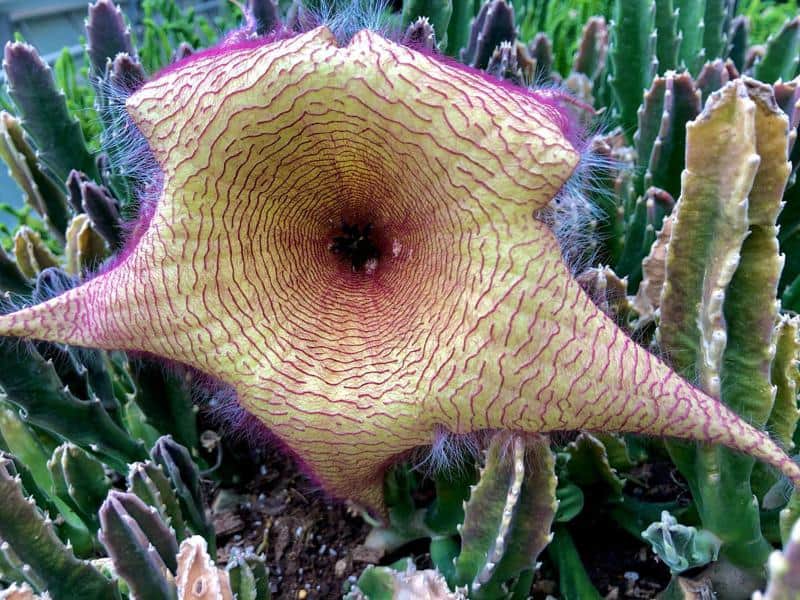 This results in increased pollination success for the plant. But why would flowers evolve to look like birds? Let’s take a closer look; first we’ll focus on an incredible family of plants with many bird-like features – orchids…

One specialised family of plants that contains several examples of flowers which look like birds is the orchid family – Orchidaceae. This family is fantastically diverse and can be found in many areas of the world. Often, orchids are used as popular houseplants – you may even have one on your windowsill! 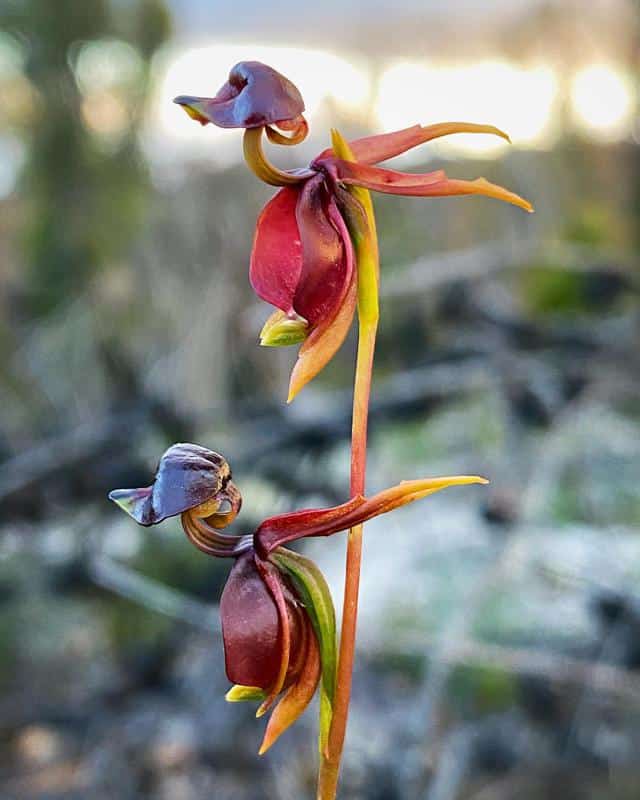 The flowers of this orchid species look very similar to, you guessed it, a duck in flight! Each flower is only around 1-2 cm long, and flower through late spring to early summer. Their native habitat is primarily eucalyptus forests in Australia where they have formed a symbiotic (interdependent or mutualistic) relationship with a crafty type of root fungi.

These blooms may look like a duck to the human eye, but they are designed to look like the Flying Duck orchids main pollinator – a sawfly. Specifically they resemble a female sawfly and reel in male sawflies who are in search of a mate. When the sawfly lands, the vibrations spring a trap, catching the sawfly and forcing it to back out over the pollen deposits.

Male sawflies struggle to pick up hints – the next time they see a Flying Duck Orchid they will be tricked again and end up trapped again, passing pollen from flower to flower. 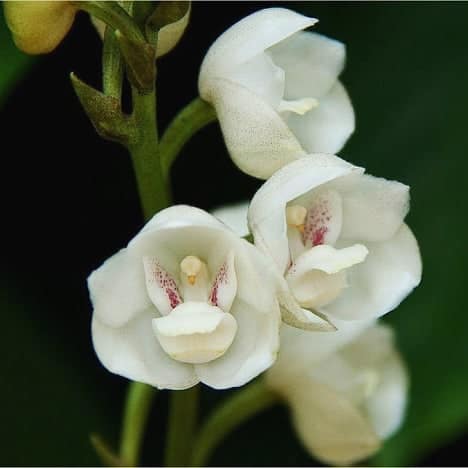 The Dove or Holy Ghost Orchid must be one of the most stunning orchid species. Each waxy bloom contains a miniature white dove which looks ready to flap out of the flower towards you. This species is found in Panama and the nearby countries.

It is an epiphyte which means that it grows in moss on tree trunks above the forest floor. Although the reason for the resemblance to a dove in unknown, the flowers do emit a fragrant, beer-like smell to attract pollinators.

Unfortunately it is an endangered species in the wild due to over-collection of specimens for horticultural use. 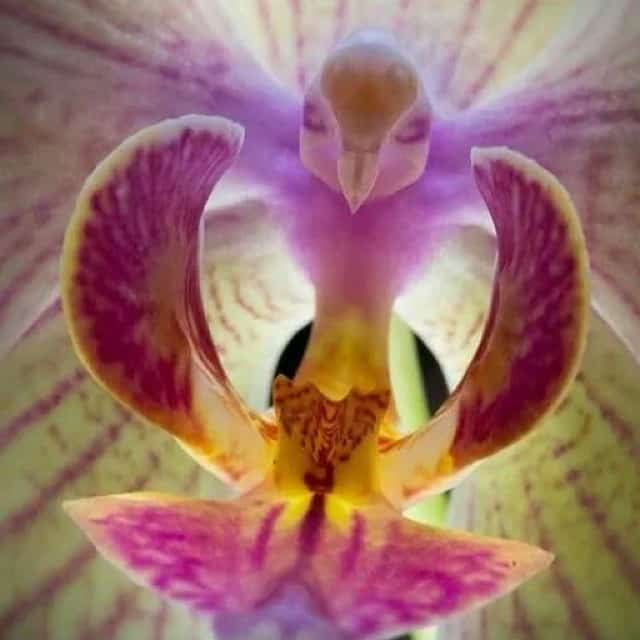 Also called a Moth Orchid due to its resemblance to a moth when viewed from a distance, this species possesses a specialised petal which strongly resembles a bird’s head.

It is believed that the bird’s head pattern is a device the orchid has evolved to frighten insects and deter them from feeding on its nectar, thereby reserving the nectar for moths. This species can be found from Turkey through to Iran, and in areas of south-east Asia. 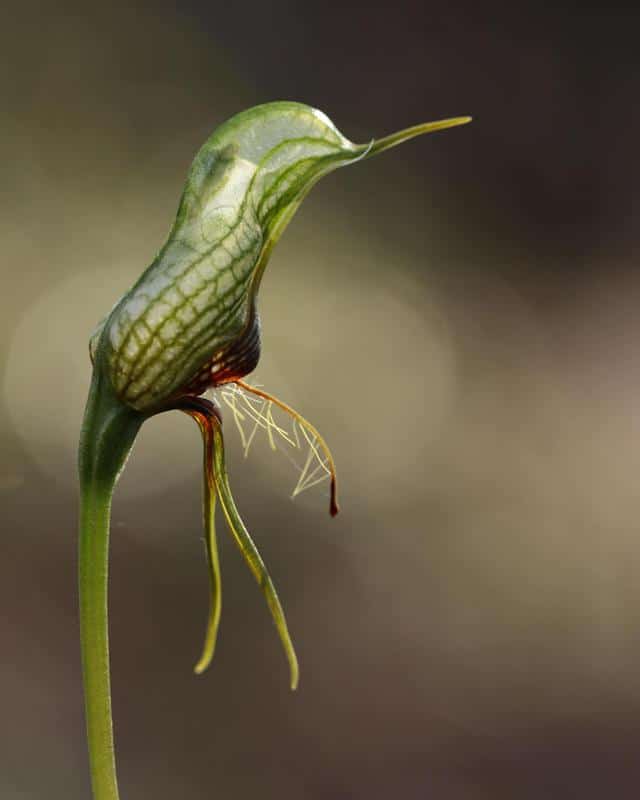 Also known as the Western Bearded Greenhood, the Bird orchid is an amazing example of a green-flowered plant species. It is a type of bearded orchid – this group is characterised by terrestrial growth, little or no leaves, the ability to self-pollinate, and fringed or bearded labellum.

The Bird Orchid is endemic to south-west Australia, and grows only in shrubby woodlands. The flowers closely resemble a small bird although the reasons for this are as yet unknown. 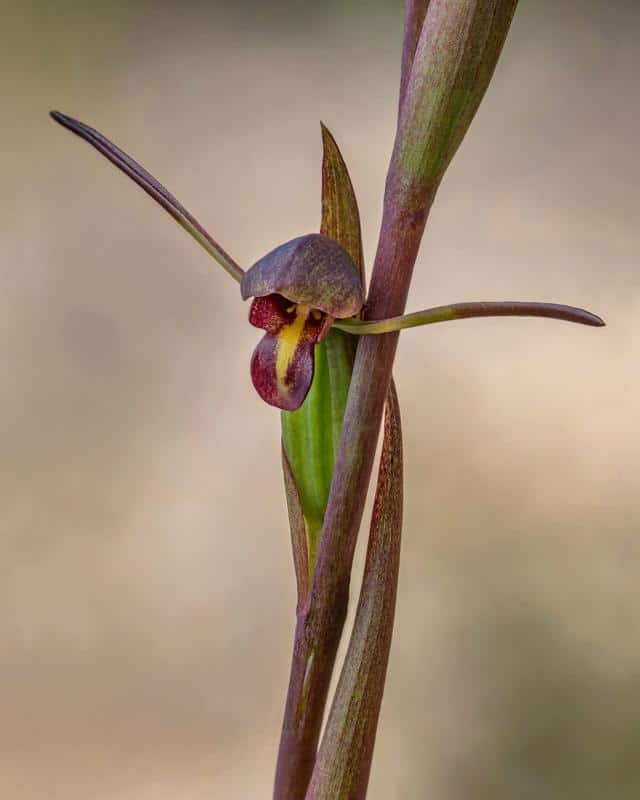 The Bird’s Mouth Orchid bears an uncanny resemblance to a chick begging for food from a parent bird, complete with outstretched wings! Also known as a Horned Orchid, this species classed as widespread but uncommon across Australia and New Zealand, and rare in Tasmania.

Information about the Bird’s Mouth orchid is difficult to obtain, but some have suggested the appearance may encourage birds to pollinate this species due to the parental urge to feed gaping chicks during nesting season. 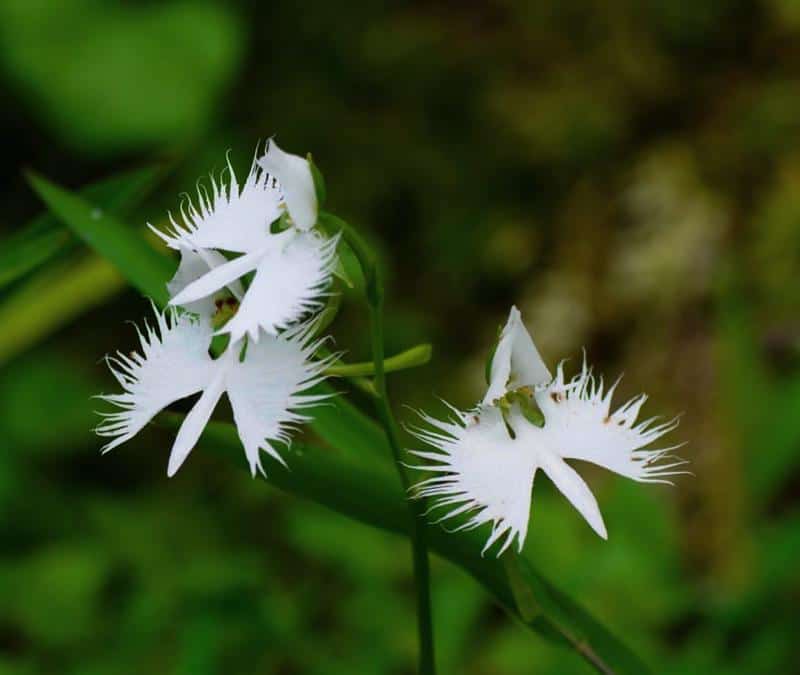 No bird-like flower list would be complete without the White Egret Flower or Crane Orchid. The pure white petals with fringed edges look precisely like a bird in flight. In the past it has been found in similar habitats to the Snowy Egret, its namesake.

This species can be found in China through to Japan and Korea, and even some locations in Russia. Although it is widely traded, it is endangered in its native habitat due to over-collection and habitat destruction. However, it is relatively easily cultivated, and efforts are being made to increase its numbers and potentially re-stock the wild population. 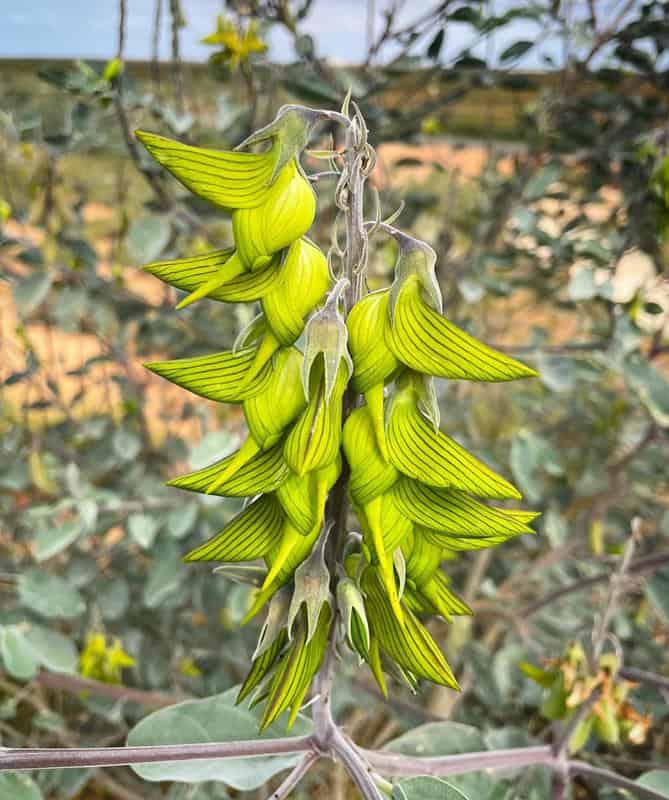 This beautiful cluster of lime-green flowers with the appearance of a flock of birds is called a Green Birdflower. It is part of a plant family called the legumes (to which regular garden peas belong). This species is native to Australia and can be found in dry habitats like deserts and sand dunes.

Whether this plant has formed bird-like flowers through natural selection or simply by chance is a controversial topic. Some scientists have suggested the flowers could help boost pollination success as one of the main pollinators of these flowers are Honeyeater birds. Whereas others believe the flowers could be a technique to reduce herbivory. 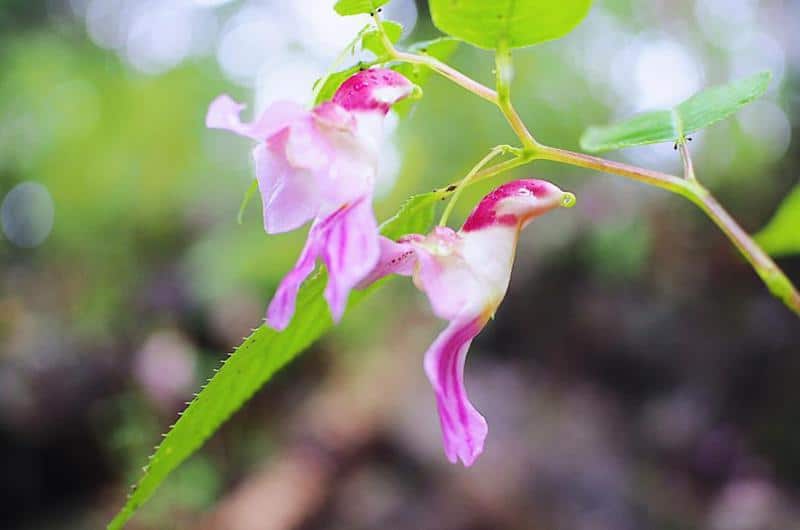 A type of Balsam, the Parrot Flower sports distinctive red-pink, purple, yellow and white flowerheads. The parrot-like look of the blooms is completed by a small spike or curl of yellow, resembling a beak – extraordinary!

This species can be found in small regions of Thailand, Burma and India, in tropical forests. As a rare species, Thailand lists the Parrot Flower as a protected species and bans all trade and export of it.

Intriguingly, the pollinator of this species is unknown. However, it has been suggested it may be a bird as some nectar-feeding birds have very long tongues which enable them to reach the nectar inside deep flowers. 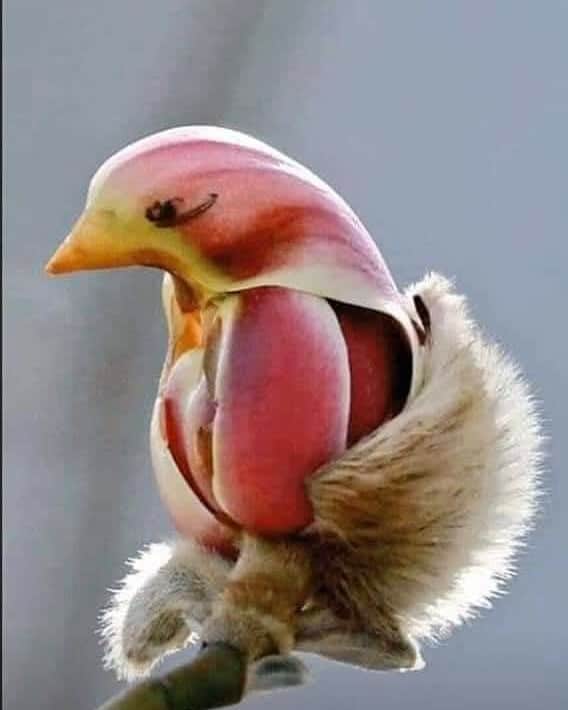 Native to China and with a long, historical association with Buddhist temples, the buds of Yulan Magnolias have the appearance of a graceful pink bird. As the flowers open up they turn from pink to white, and exude a citrus fragrance.

Magnolia plants are pollinated by beetles, so it is possible the unfurling flowers resemble birds to ward off predators and protect the beetles. This benefits both the beetles and the magnolia, and increases the chances of successful pollination. 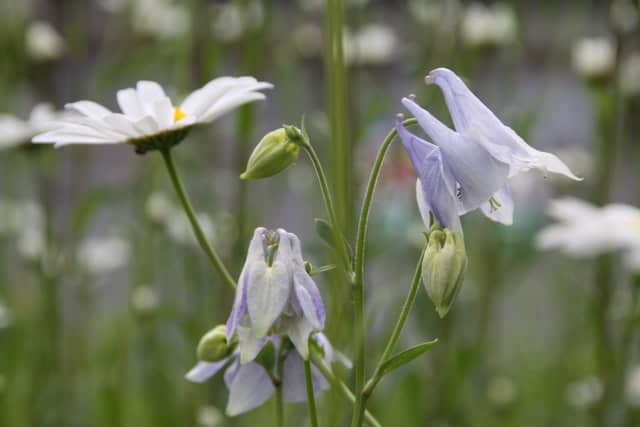 Known to some as Granny’s Bonnet or more generally as Aquilegia, the flowers of Columbine have some beautiful bird-like features. Although the genus Aquilegia means eagle in Latin, the common name Columbine means dove in Latin. While some regard the petals as resembling the claws of an eagle, others see five doves clustered around the centre, with their beaks meeting in the middle. I think I’m in the dove club!

Different Columbine species are pollinated by different animals ranging from hummingbirds to bumble bees and hawkmoths. Native American people used this plant for edible and medicinal purposes – this is not recommended generally as some parts of the plant are highly toxic! Columbines can be found throughout the northern hemisphere in meadows and woodlands, and are a popular garden plant. 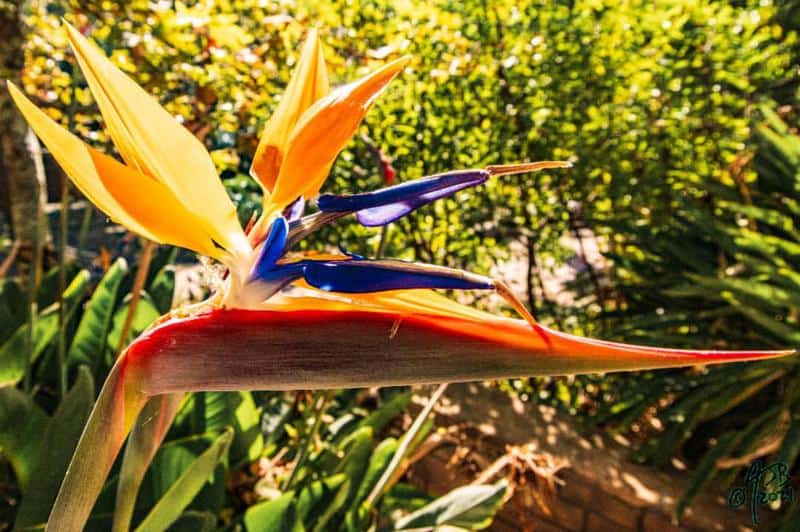 The eye-catching, bright orange flowers of a Bird of Paradise plant are as hard to miss as their namesakes – the stunning Bird of Paradise family. This species can be found in South Africa but is widely used as a houseplant.

The highly specialised blooms have evolved to encourage pollination from birds, usually Cape Weavers. This species of sunbird feeds on the nectar but must delve pretty deeply into the flowers to access it. The Bird of Paradise flower provides a sturdy perch to enable them to reach the nectar and activating a mechanism which pushes the anthers outwards. This causes the birds’ feet to get covered in pollen, passing it from flower to flower as it continues feeding. 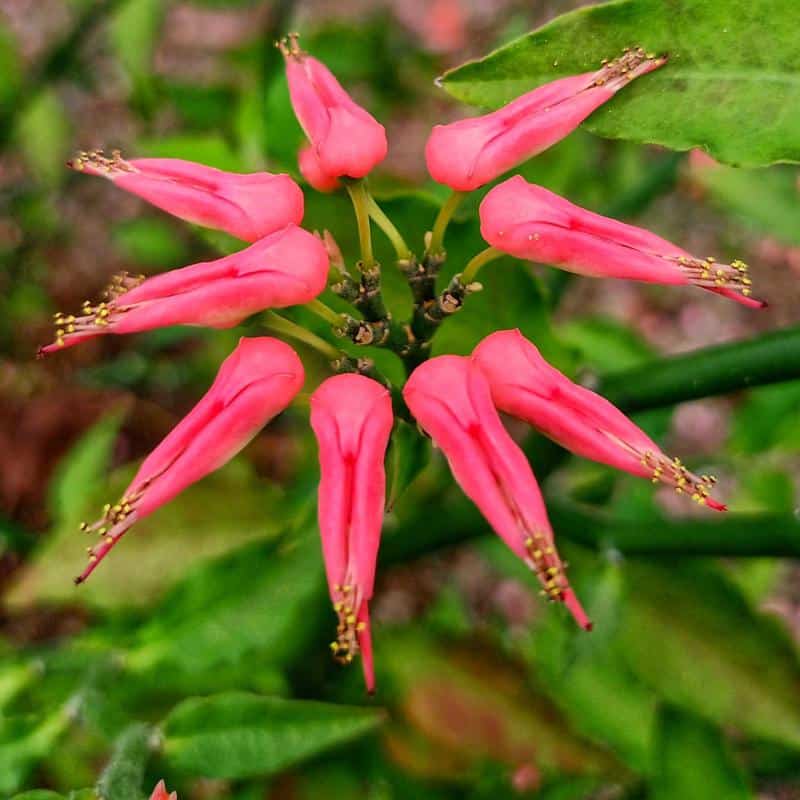 The Redbird Cactus is actually a succulent, and can be found in the Americas from Florida to Venezuela. This species has an incredible number of common names including:

The flowers look just like a flock of busy, red birds and are pollinated by hummingbirds. Perhaps the hummingsbirds see a whole cluster of birds and associate it with a food source – but they must be careful to stick to the nectar as the latex contained in the plant’s flesh is toxic!