You’re outside during the fall – perhaps on a short stroll through woodland or tending to a shaded patch of your garden – and you come across a flower you don’t remember planting. But are you sure it’s actually a flower and not just one of these mushrooms that look like flowers? 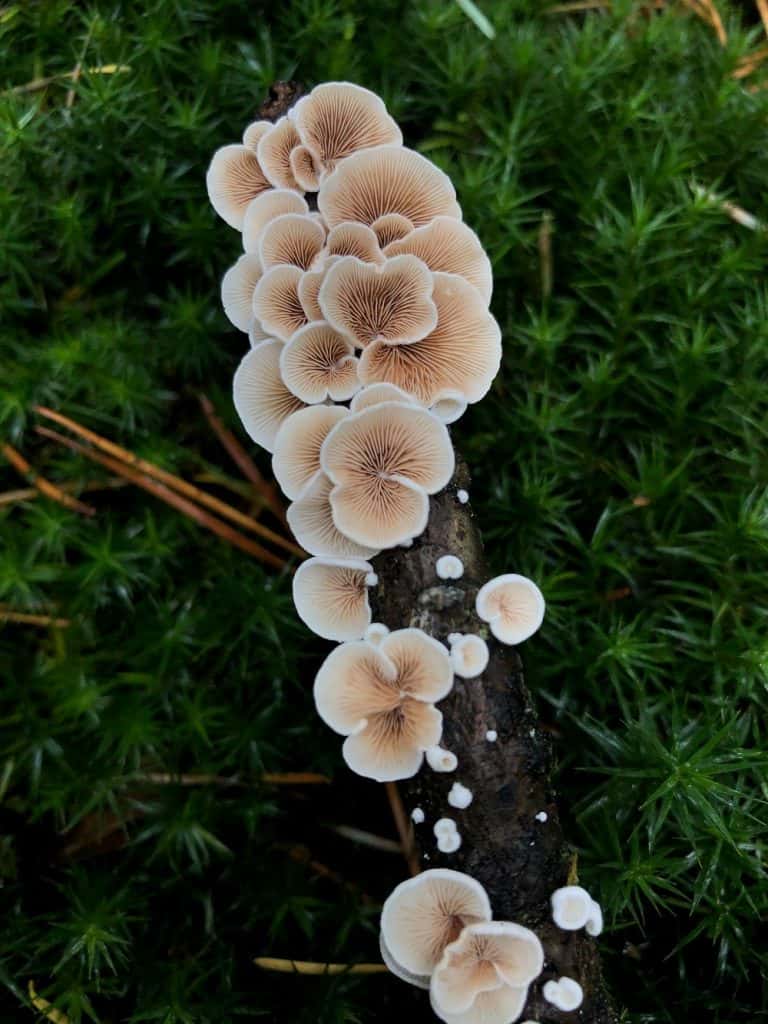 When we think of mushrooms, we likely think of cute button mushrooms or the mushroom varieties we cook with, like shiitake. You might think of red and white spotted mushrooms and “toadstools” like the kind in fairytales.

But the truth is that there is a huge spectrum of different fungi that come in endless shapes, sizes and colors. And some of those mushrooms look like flowers.

The part of the fungi that’s above the soil is the mushroom part. The main role of this part of the fungi is to create and release spores to spread to other areas – often, turning the ends of the caps upwards helps the spores release and also gives the fungi a flower-like appearance. But don’t forget that a lot of fungi is underground. The mycelium part of the mushroom is beneath the soil, searching out like a network of roots to find nutrients and moisture.

As fungi rely on the mycelium for nutrients, they don’t use photosynthesis. That’s why mushrooms that look like flowers don’t have leaves or parts that look like leaves.

That’s the best way to tell a mushroom from a flower. A mushroom doesn’t need leaves to photosynthesis light, while a true flower does.

We will get to our list of 10 pretty mushrooms that look like flowers below, but first we want to mention another type of fungi.

As discussed on A Gardeners Forum, some mushrooms may split due to drought or dryness when releasing spores. So, a common toadstool mushroom might start to dry out as the seasons change, causing the mushroom top to split into multiple pieces that look like petals!

Here are 10 varieties of mushrooms that look kind of like flowers. Whether a mushroom looks like a flower or not, make sure you are certain what type it is before you attempt to touch it (or even eat it). There are many mushroom look-a-likes out there that can trick you, so best talk to a mycologist. 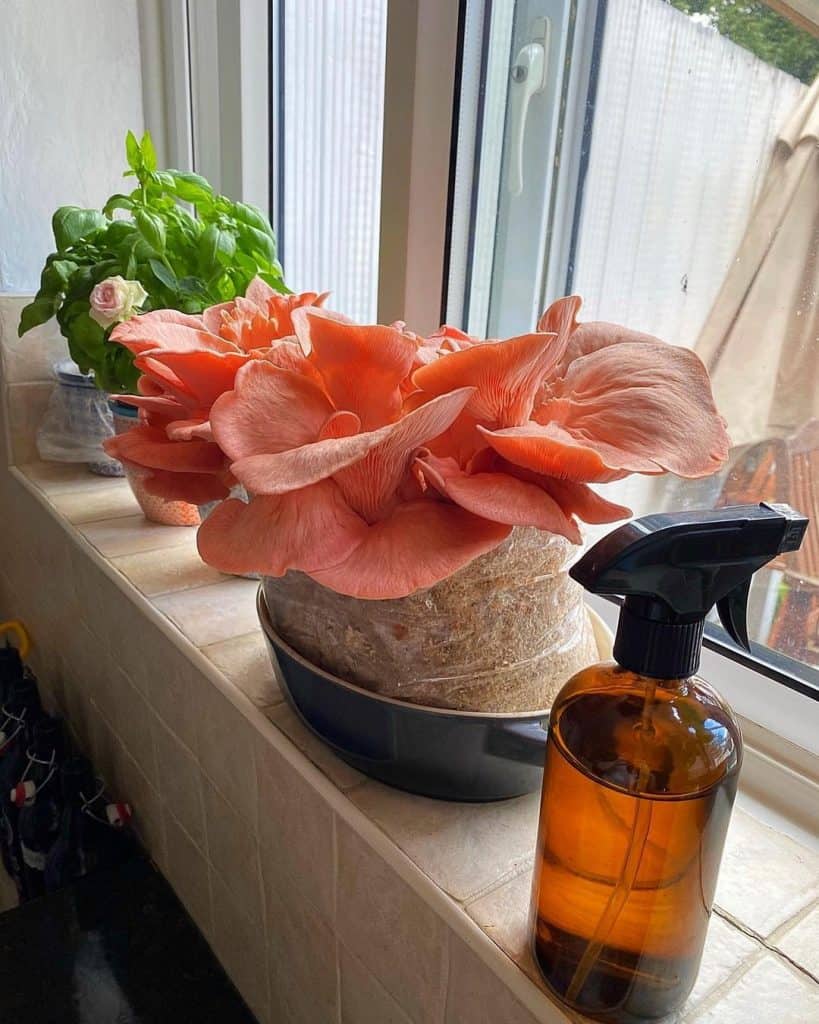 The pink oyster mushroom, Pleurotus djamor, are delicate and bright pink – obviously! These mushrooms aren’t rare and can actually be purchased relatively easily. While you’re unlikely to find them at the grocery store, mushroom specialists often stock them at farmer’s markets.

Pink oyster mushrooms create these beautiful layers and swirls of pink mushroom domes. When they grow large, they often look like coral reefs – they’re right out of The Little Mermaid! But when the pink oyster mushroom is small, the pink ripples and curves look like the petals of a blooming rose or peony. They are one of the prettiest mushrooms that looks like a flower.

Chicken of the Woods 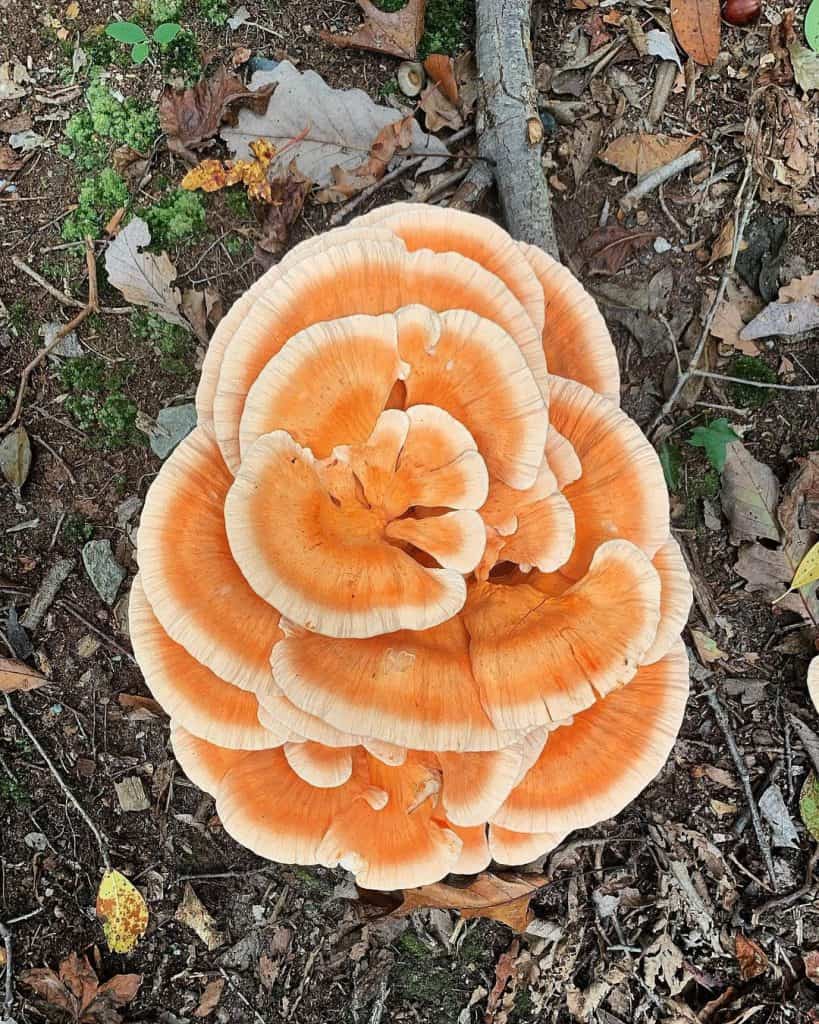 Chicken of the woods mushrooms are great for beginners to find in the wild, thanks to their bright color, and are edible when cooked. Make sure you use a mushroom identification guide however, as there are some lookalikes that aren’t so edible… 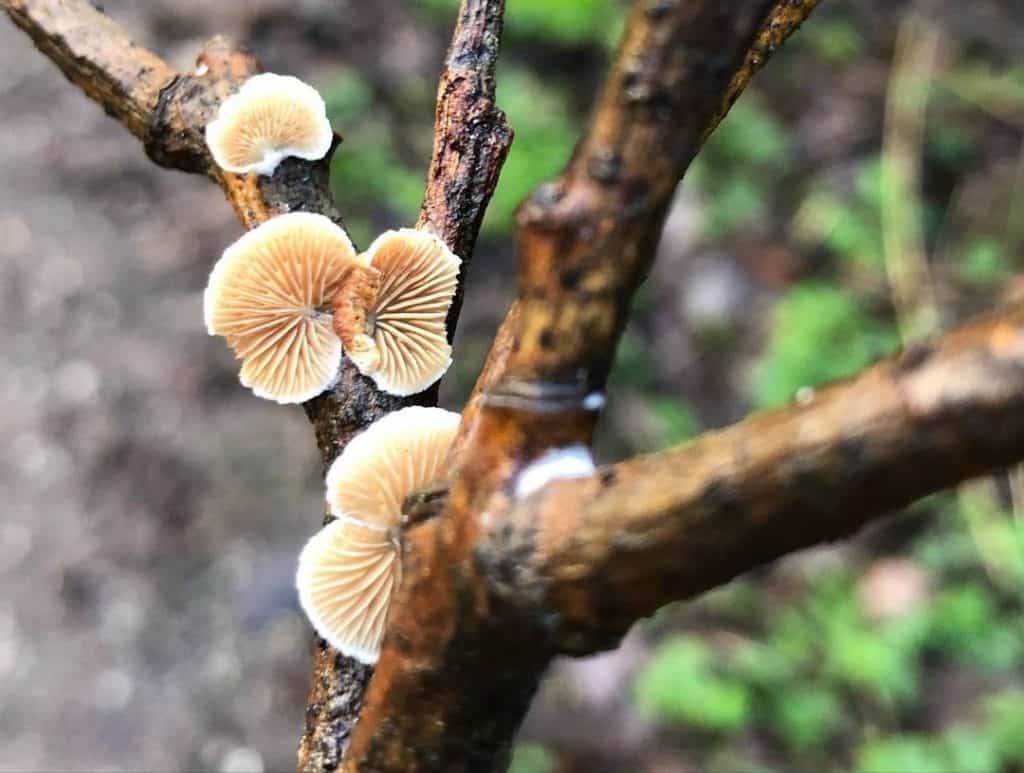 Oysterling mushrooms are just as cute as the name suggests. This variety of fungi, Crepidotus mollis, is known as the soft slipper mushroom or peeling oysterling (or just oysterling) and it’s often mistaken for white flowers from afar. When the oysterling mushroom grows on rotting tree branches, as shown in the photo above, they look just like white tree blossoms!

Oysterlings have frilly white gills that flow in a circle or half circle, giving the impression of tightly coiled flower petals ready to bloom. This mushroom is very common and grows across the USA, the UK and much of Europe. 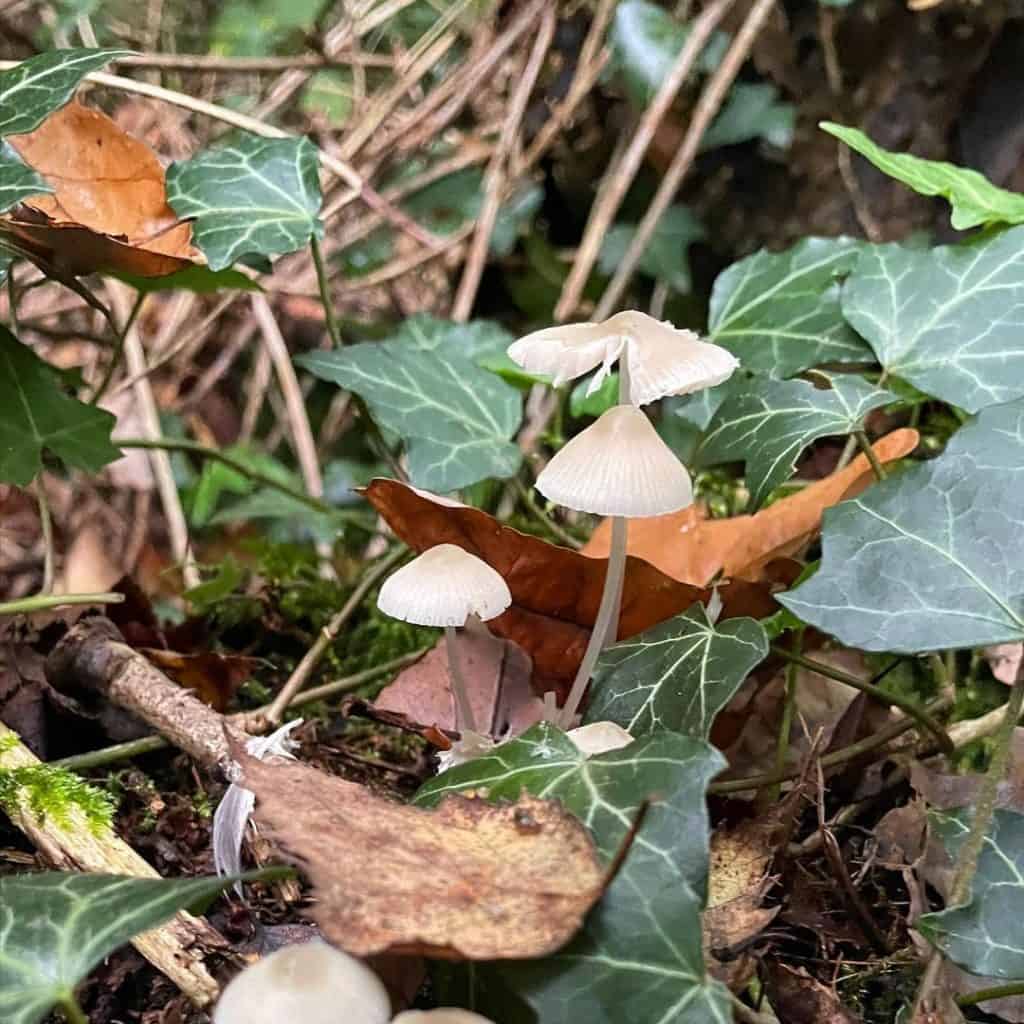 The common bonnet is, as the name suggests, quite common. Usually, this fungus is dome shaped with gills beneath it, but it’s not that uncommon to find them split (see the photo above) or inverted. When you look directly down at these mushrooms, you’d be forgiven for mistaking them for flowers instead.

Common bonnet, Mycena galericulata, typically has soft white or cream colors at the edge of the mushroom cap and darker brown colors at the center. This often gives the impression of a flower, such as a daisy, with the light-colored petals and dark-colored flower head at the center. 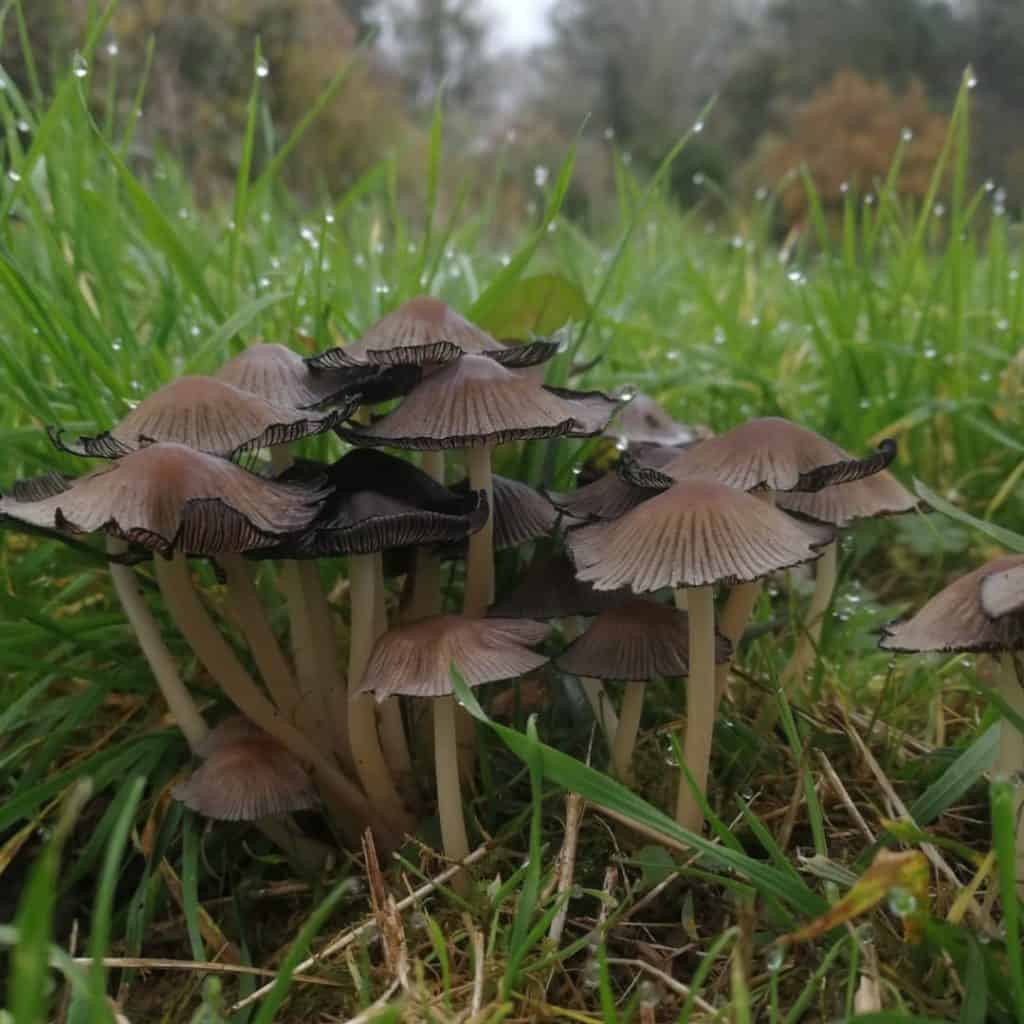 Coprinoid mushrooms are better known as inkcaps. This family of mushrooms can refer to a wide number of different looking fungi – some are edible and some aren’t, so don’t assume that all inkcaps will be great to forage in the wild!

Inkcaps are named as such due to the spore prints (those lines on the underside) which are inky black in color. As the mushroom matures, the inky spores seemingly “drip” away and the mushroom cap changes from dome shaped (like a toadstool) to flat and wide (like a flower head).

As you can see in this great photo above, the mature inkcaps have a petal-like quality where they curl upwards. For an example of another inkcap variety, Parasola plicatilis, check out this cute blue flower mushroom below. 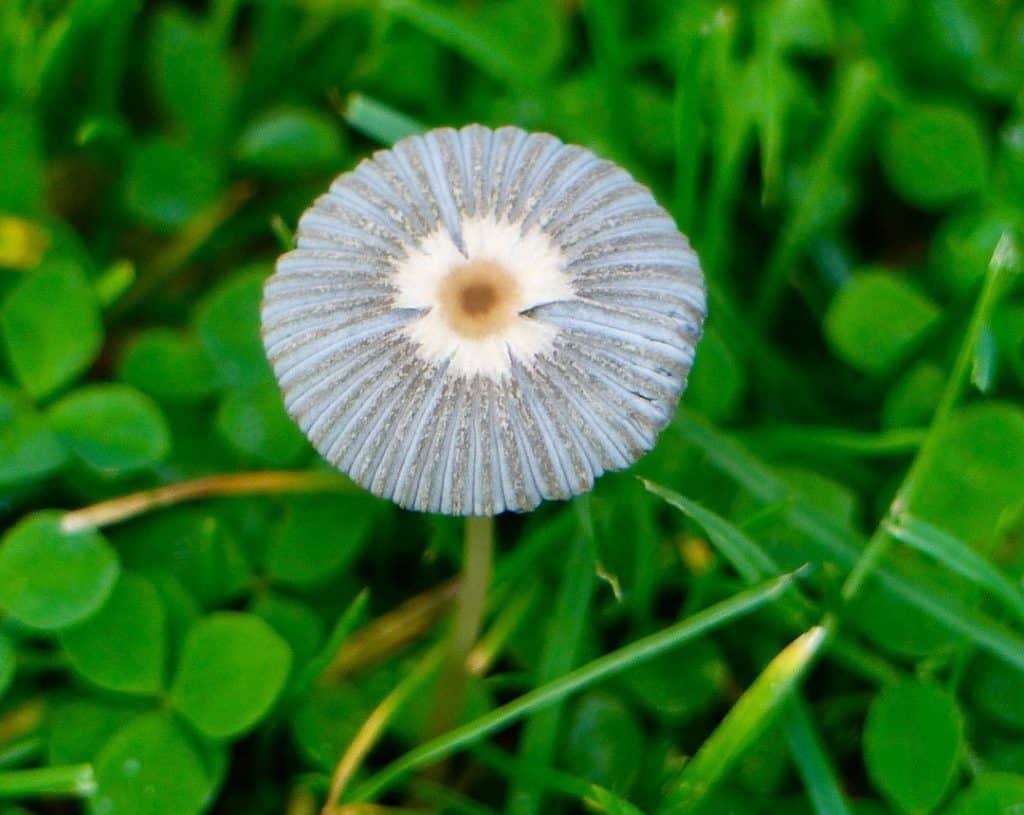 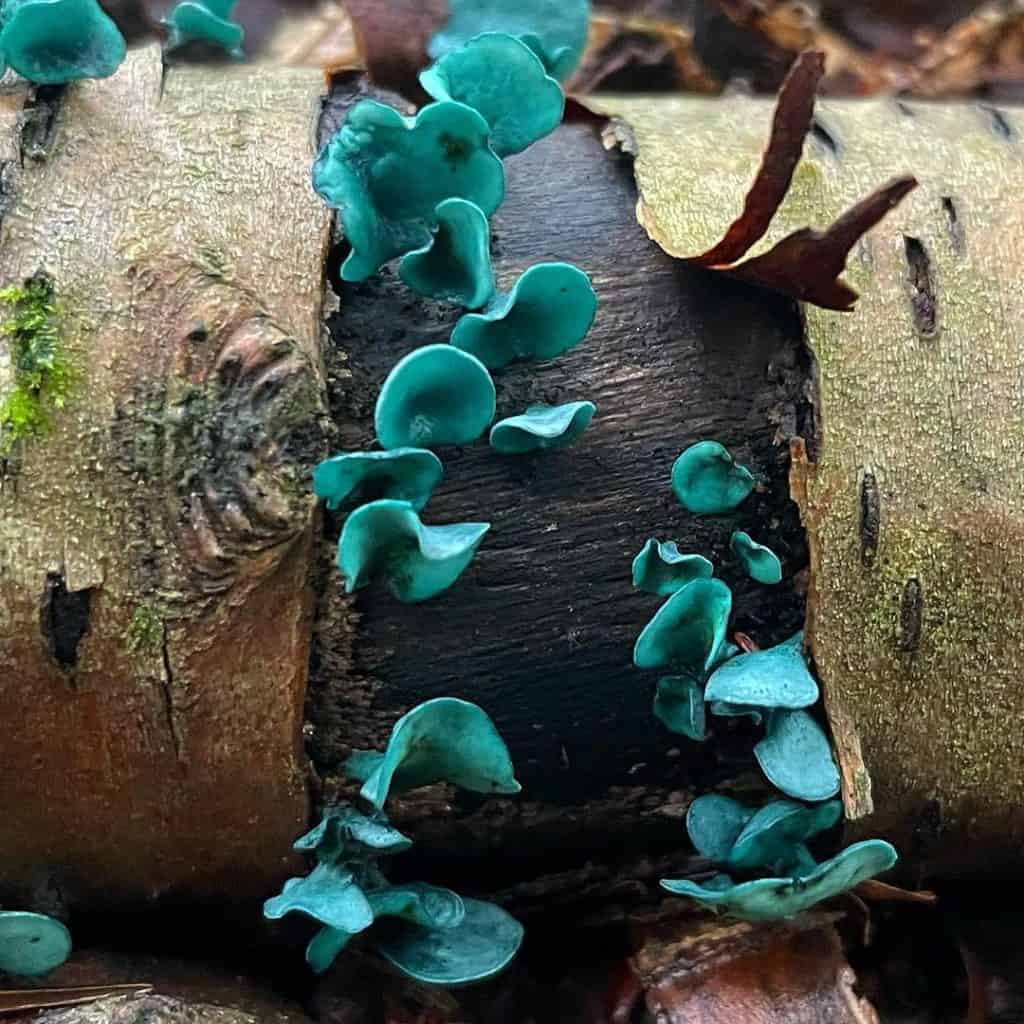 The green elf cup certainly looks more like a flower than a mushroom! The bright blue-green color of the green elf cup, Chlorociboria aeruginascens, is truly stunning. Growing in cup-shapes (but often starting off as saucer shapes), these fungi can look like foliage or flower heads, especially as it grows out of twigs and tree branches.

It’s actually unusual to see the caps of this fungi, as shown in our photo. More often than not, this mycelium just stains the wood a green blue color. Interestingly, it’s actually used to create vivid colors and designs for decorative woodworking. 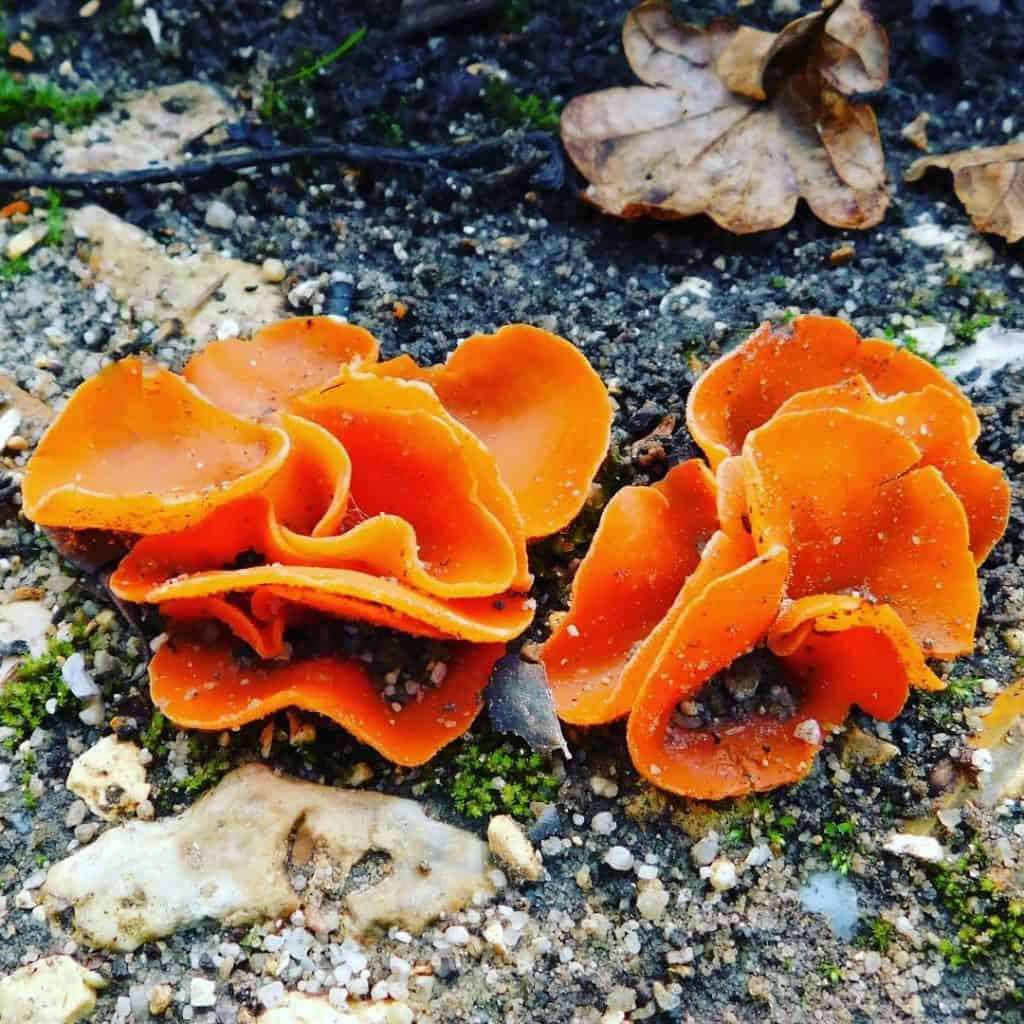 Aleuria aurantia, the orange peel fungus, looks like bright orange flowers close to the ground when the mushroom has matured. When the orange peel mushroom starts to grow, it appears as a cup-shaped mushroom. Over time, it warps and the edges curve and dip. We think this makes it appear more like a flower than a mushroom.

You can find the orange peel fungus for yourself. It’s quite common the UK and North America, as well as across Europe and Scandinavia. Just head to the woodlands and look for dark and damp places where fungi will thrive. Don’t get it mixed up with the chicken of the woods, however! 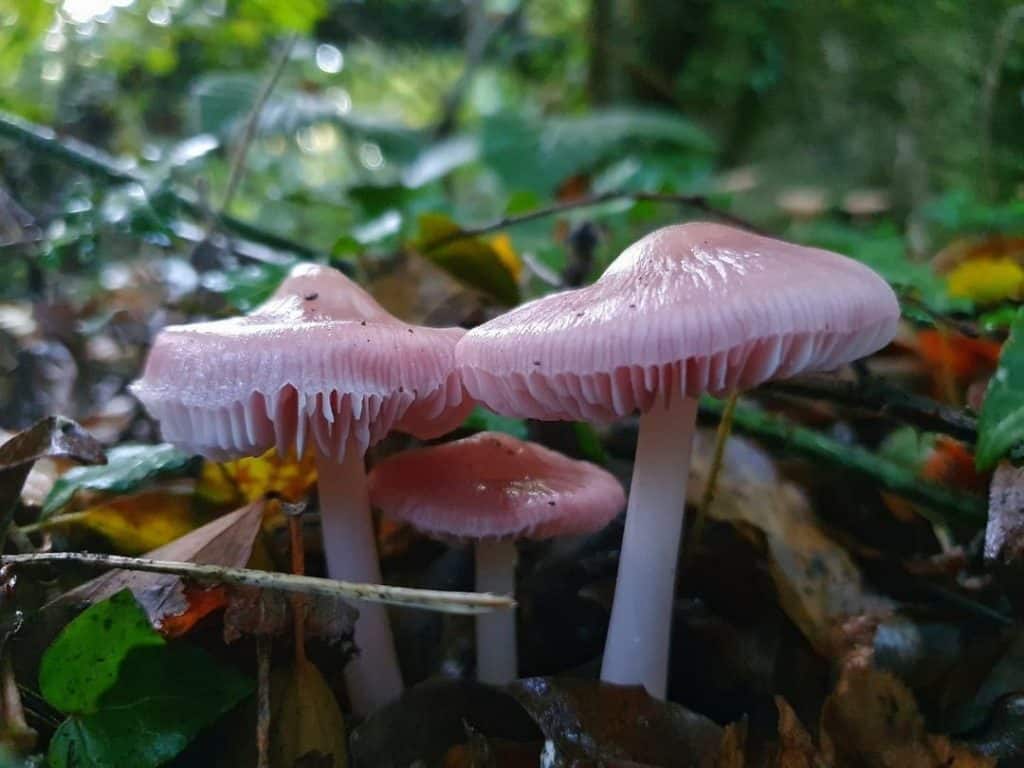 The rosy bonnet mushroom, Mycena rosea, might look pretty and harmless when it’s growing out from the fall leaves at the base of a tree… but it’s actually a poisonous mushroom so don’t even think about touching it!

We love the delicate pink color of this mushroom variety. It’s so much more subtle compared to the pink oyster, for example. 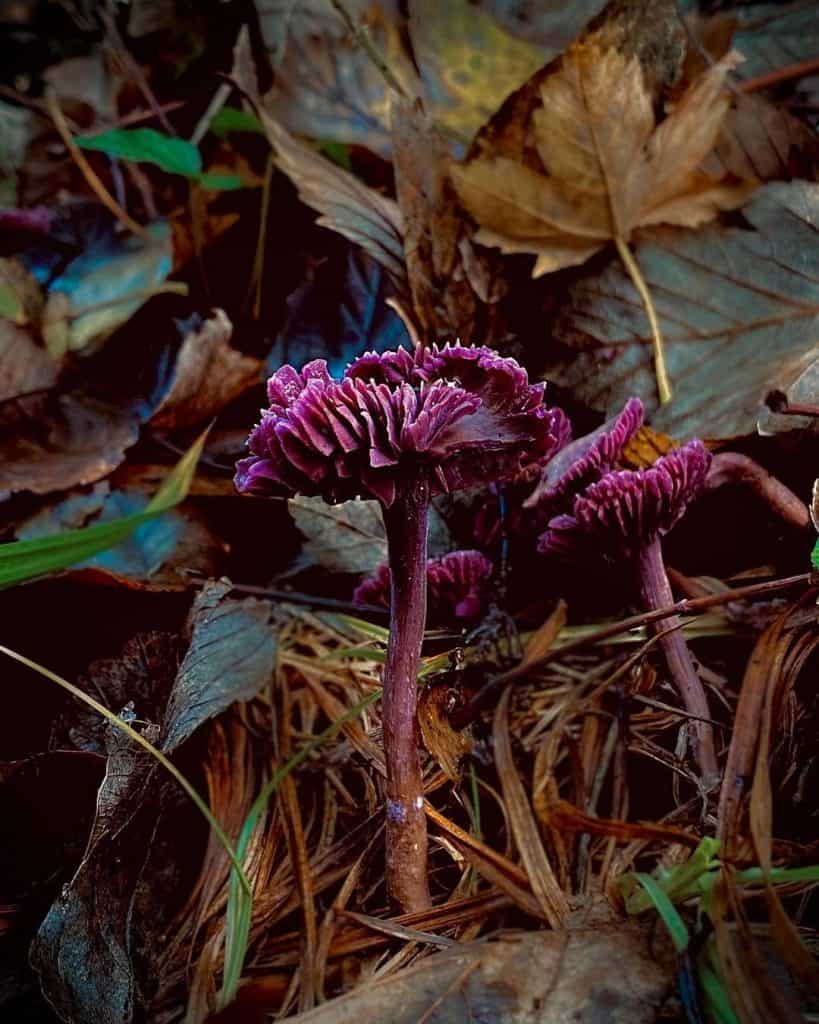 The amethyst deceiver is very aptly named! Laccaria amethystine is a bright purple mushroom that grows on the forest floor and is often edible – although it can absorb nasties from the soil it grows in, so it’s best to cultivate your ow amethyst deceiver in soil you can control.

The purple frills can look a bit like amethyst crystals, but we think they also look a lot like flower petals. If you want to find the amethyst deceiver, head to the east side of the Rocky Mountains. There are a few similar looking purple mushrooms growing on the west coast, but these are actually different variety of fungi. 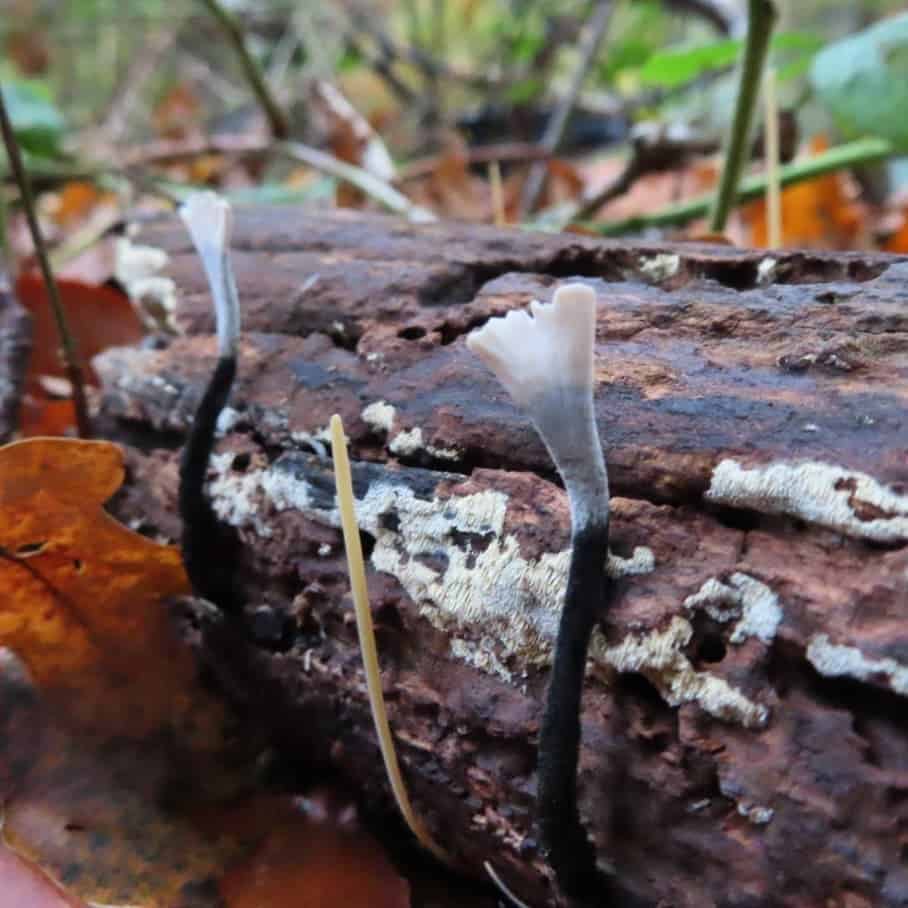 Candlestick fungus, Xylaria hypoxylon, is also known as candlesnuff and carbon antlers due to that distinctive twiggy shape. Like antlers, this fungus grows in sticks rather than the traditional toadstool shape.

The black branches with white tips look a little like candles. When the tips flair out, as shown in the photo above, they also tend to look like unusual flowers. You can find candlestick fungus in autumn and winter across the USA and much of Europe.

Yes, this is a real thing. There are plants that are classified as flowers but actually look a lot like mushrooms. Wayne Armstrong has written an interesting article on the topic. He, and his students, have found numerous examples of flowers that look like mushrooms in and around California. 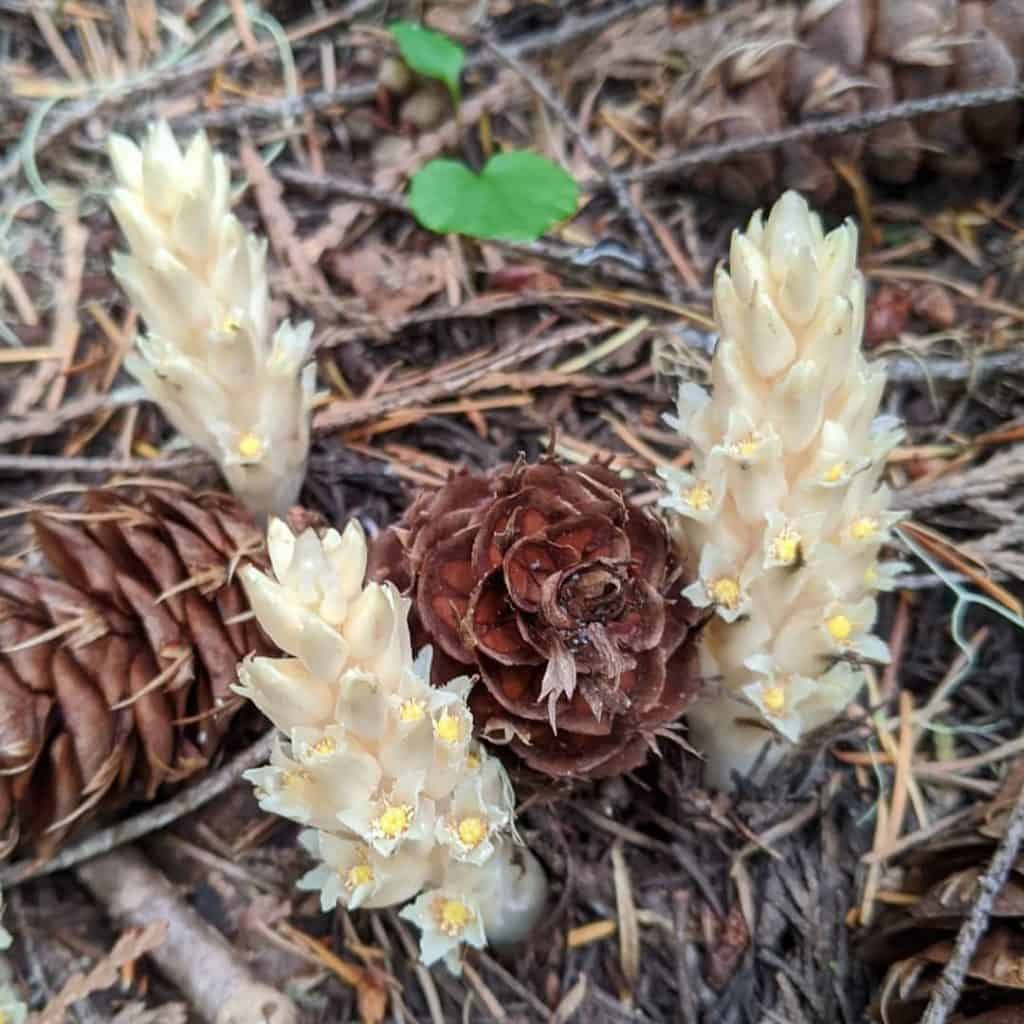 One of the most striking is called fringed pinesap, Pleuricospora fimbriolata, which looks like it has mushroom scales but these are actually small white flowers. Although, calling this plant a flower is a little misleading. It is technically a mycotrophic wildflower, meaning that it lacks chlorophyll and doesn’t photosynthesis in the way most flowering plants with leaves do.

Soil fungi living within the root system absorb nutrients from the soil, which enables the plant to grow and “bloom” without using light and photosynthesis. They’re more commonly found in coniferous forests, where it’s dark and cool and damp (aka, home sweet home for fungi).

Another example of a mycotrophic flower is the snow plant, Sarcodes sanguinea, which is also found in the coniferous forests of California, Oregon and Nevada. This plant has vivid red blooms that are hard to ignore! It starts to grow as the snow melts, which is how it got the name snow plant. You’re most likely to find it growing out of fallen pinecones and other forest debris. 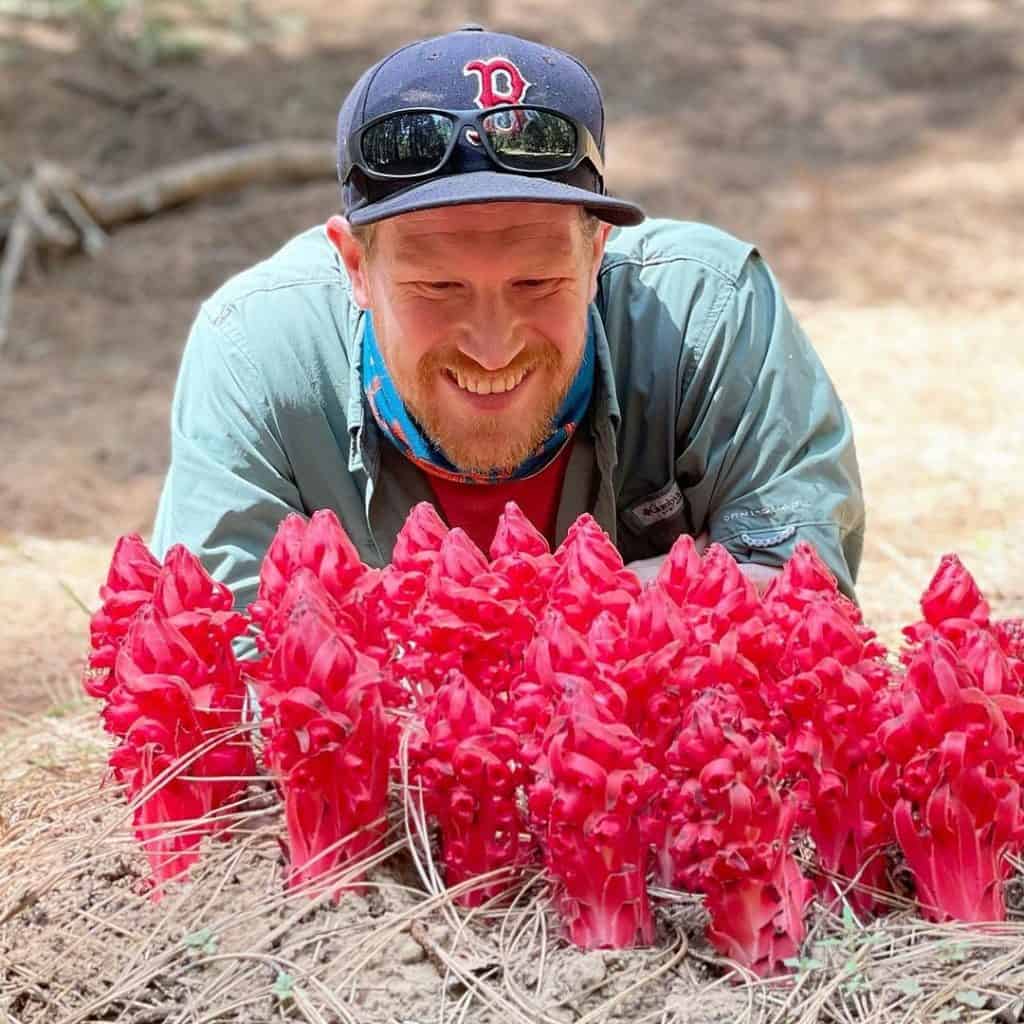 There are numerous other mycotrophic flowers, but one of our favorites is the spotted coralroot orchid, Corallorhiza maculate. Unlike the previous examples, this flower is a parasite living on a mycorrhizal fungus. It is beautiful with delicate flowers, but no leaves (as it relies on the fungus instead of photosynthesis). It can be found in coniferous and subalpine forests in North America as well as Central America and tends to bloom during the summer months. 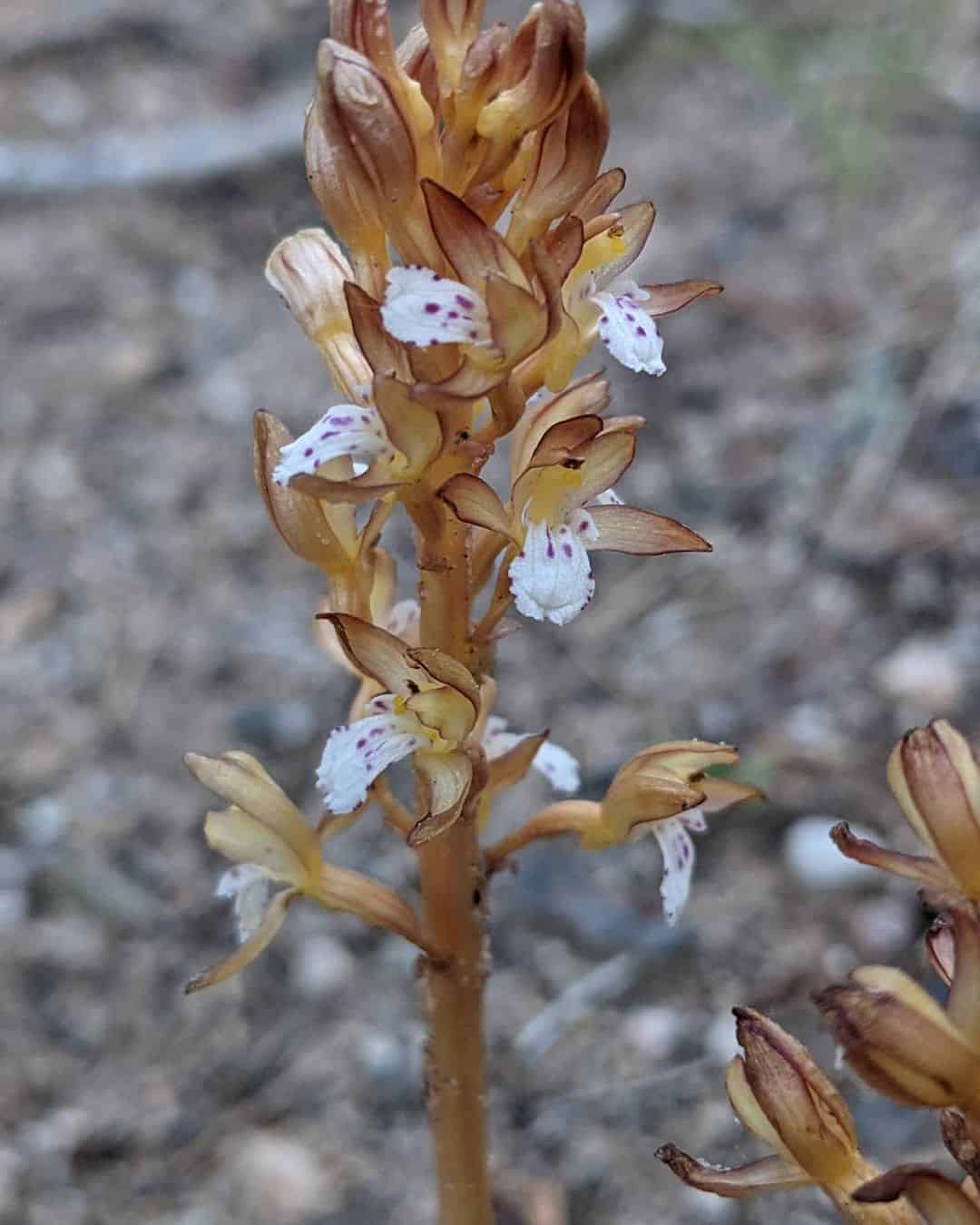 How can I identify mushrooms?

The best way to do it is with a mushroom identification book. Sure, it’s a little old-fashioned but they usually hold more info than the internet (believe it or not) and will help you work out what mushroom you’ve found even if you haven’t got any phone signal.

If you can’t identify a mushroom, don’t touch it – better to be safe than sorry! You could also photograph unknown mushrooms and have a mycologist identify them for you.

No, most mushrooms that are shaped like flowers aren’t typically edible. The most common edible mushrooms in the US include boletes, chanterelles and morels – but none of these varieties look like flowers.

How can you tell if a mushroom is poisonous?

The best way is with a mushroom identification book or online source. Check the mushroom carefully against the criteria to work out what type it is. Some poisonous mushrooms look extremely similar to edible ones.

Some may split during droughts to create petal shapes, others may grow that way because it helps them release their spores.