Camels are some of the most fascinating and hardy animals on planet Earth. These iconic beasts of the desert possess a whole host of impressive characteristics that make them perfectly suited to the harsh conditions they experience in desert landscapes.

Perhaps camels are most famous for their humped silhouette, their close association with humans, or their water conservation techniques. But did you know that their eating habits are so specialized that they can go for extensive periods without eating or drinking? Or that their lips have an incredible range of movement and toughened skin, enabling them to eat the thorniest of plants?

Here, we aim to thoroughly answer the core question: what do camels eat? Indeed, it is hard to imagine what they can find to snack on in such an extreme climate. The short answer is – anything and everything they can find! Join us as we delve deeper into the dumbfounding day-to-day life of dromedaries, and curious capers of camels to find out more about their eating habits.

What is a camel?

To properly address the question of their eating behaviors, let’s first find out exactly what a camel is…

In technical terms, a camel is an even-toed ungulate, an exclusive club with some specific entry requirements. The key characteristics include:

What does it mean to bear weight on an even number of toes? In this case, the meaning is very literal – even-toed ungulates usually carry themselves on either two or four toes. Some of them have more toes on each foot, but they are not used specifically for weight-bearing.

So where do camels come in? Well, camels only have two toes which are widely spread, helping to prevent camels from sinking into the desert sand. 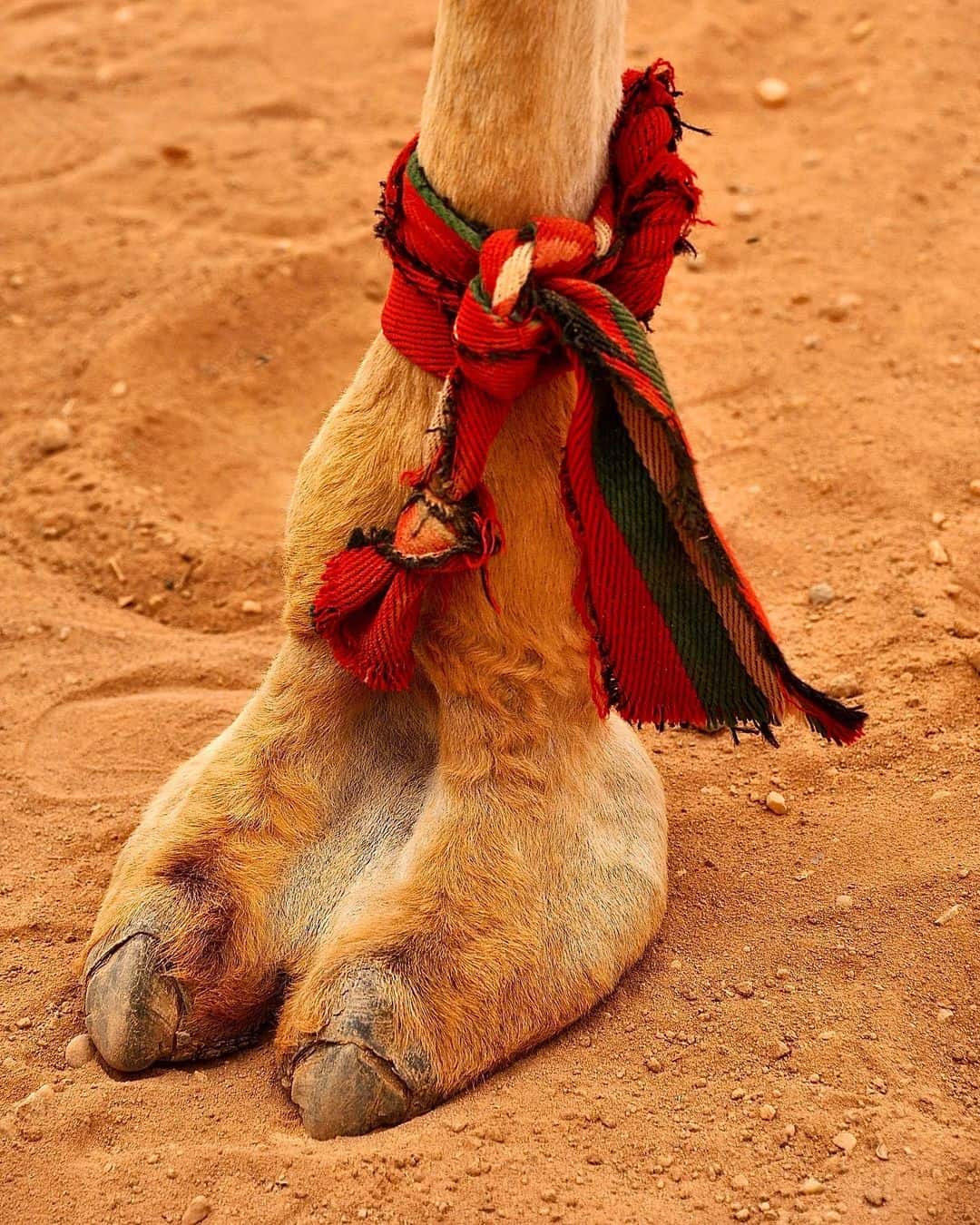 Like many even-toed ungulate species, camels are ruminants – to ruminate means to regurgitate the food that has been ingested, and to rechew it in order to continue breaking down the plant material (or cud). Ruminants improve the efficiency of absorbing nutrients from tough plant matter by re-processing it and further stimulating their digestive abilities. Complicated but clever!

The ownership of one hump (in the case of dromedaries) or two humps (in the case of camels) is unique to camel species. Humps are primarily made up of fatty deposits gleaned from the food they eat and stored in case of food and water shortages – an inevitable consequence of a desert-dwelling lifestyle.

But how many types of camel are there? And where do they live? How does their habitat inform their eating preferences? Let’s take a close look…

How many different species of camel exist? And where can they be found?

There are three species of camel extant today:

Main traits: Two humps, a dense coat in winter which is shed when the temperatures rise in summer, domesticated. 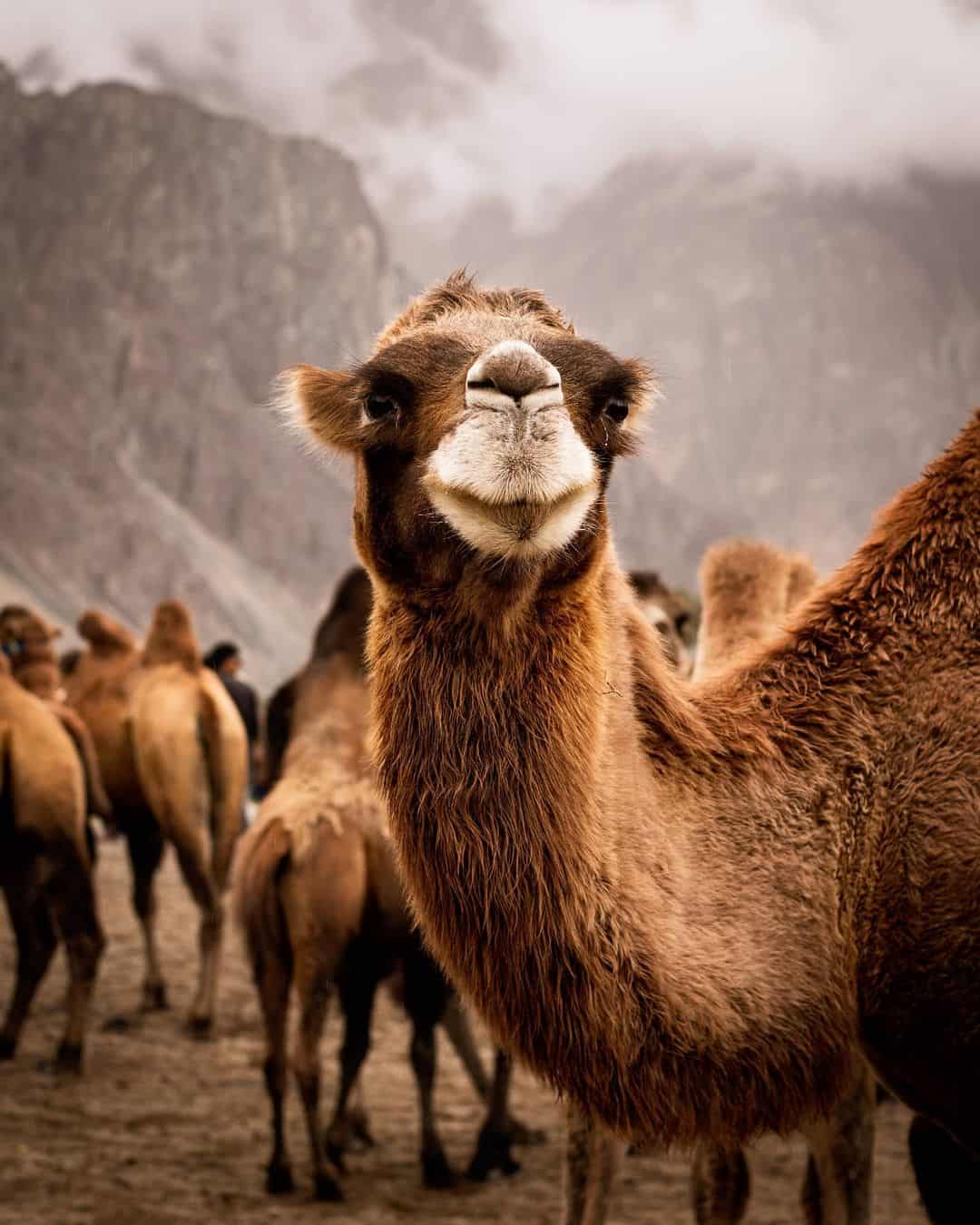 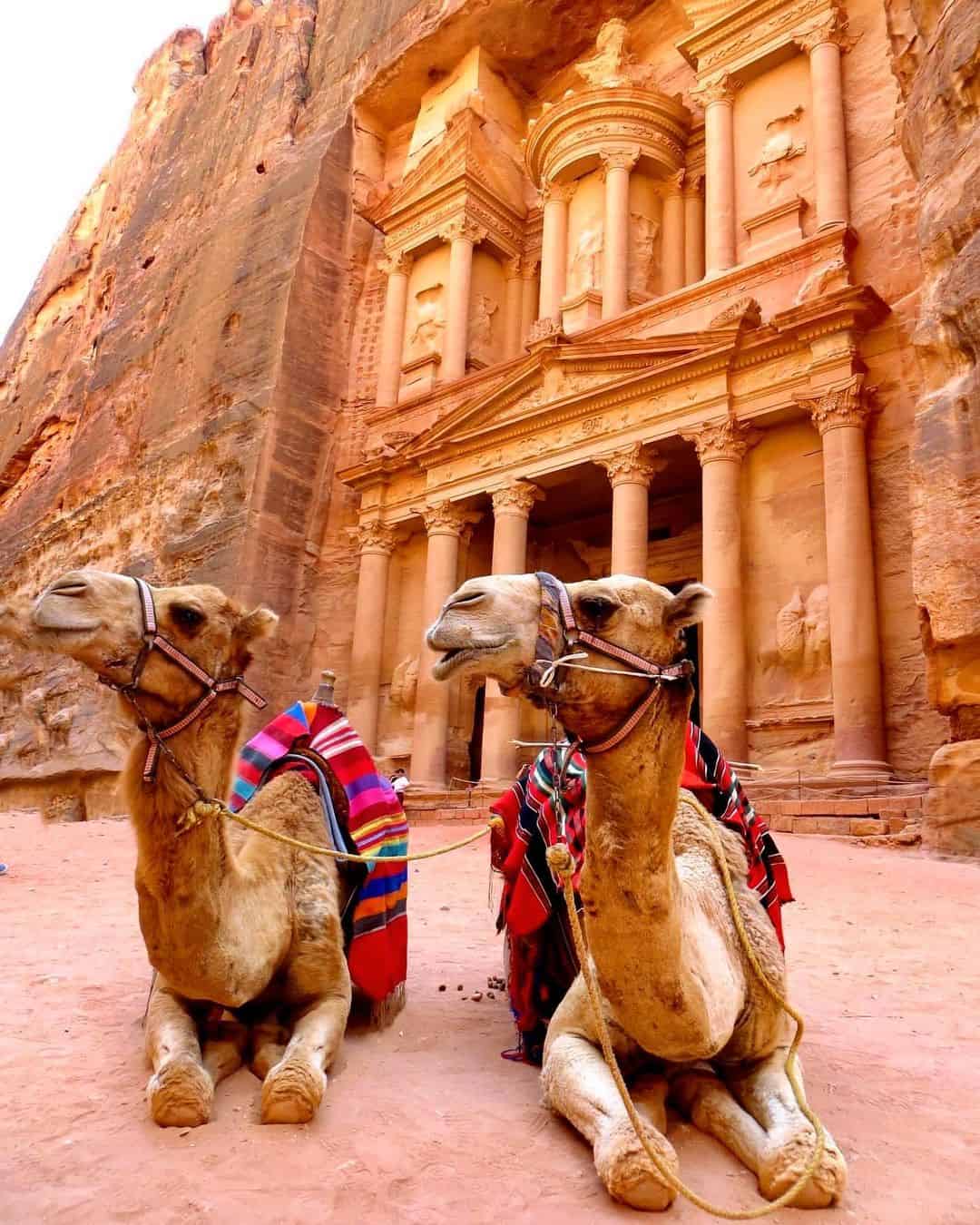 Main traits: Two humps, similar to a Bactrian camel but genetic differences, able to drink saltwater, the only wild species of camel. 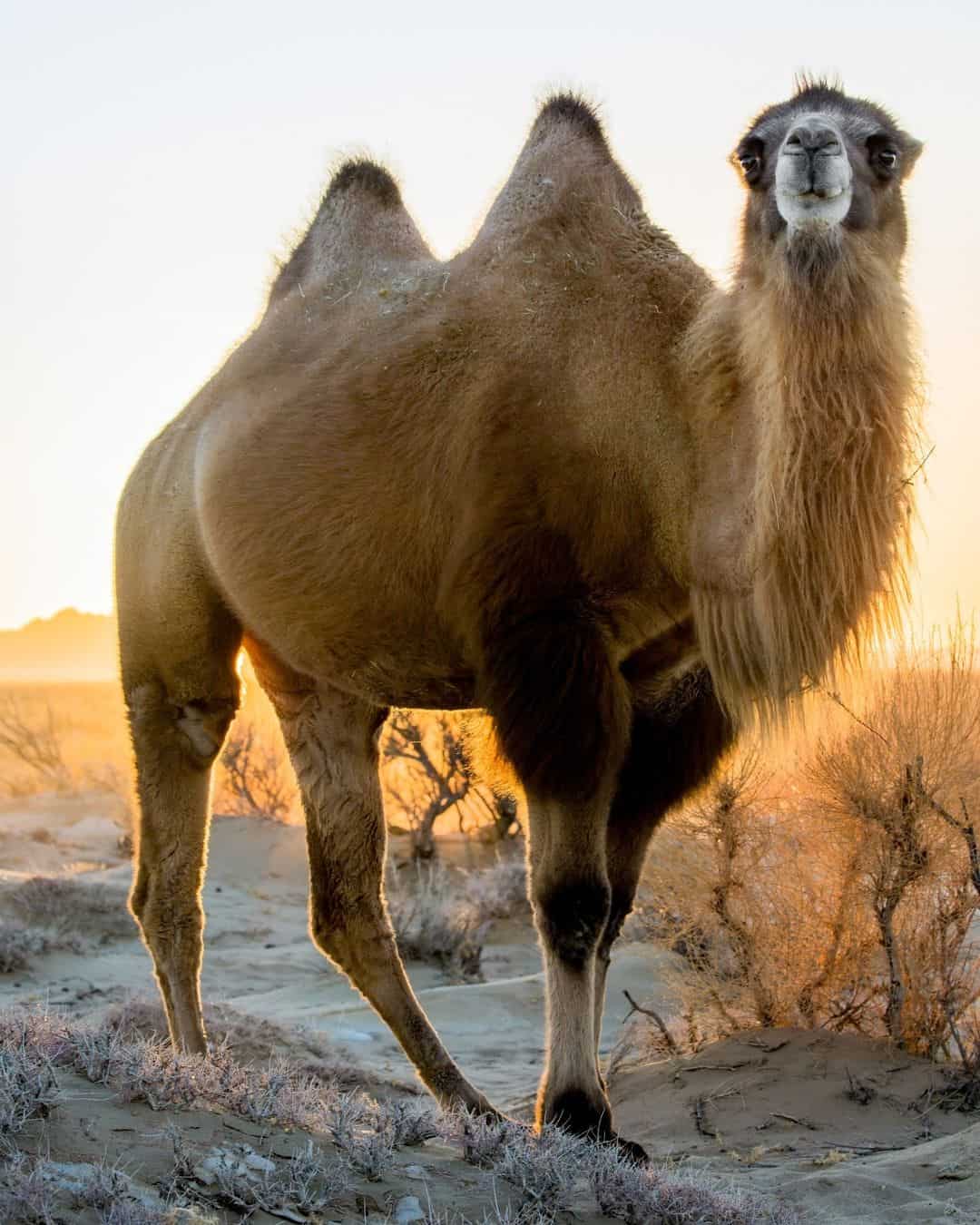 Historically, the Bactrian camel has a long association with humans, and originates from steppe landscapes of central Asia. Arabian camels have also been associated with humans for thousands of years and is found in arid to semi-arid regions of Africa and the Arabian Peninsula. Neither of these species boast truly wild populations anymore to extensive domestication by humans, but there are some feral populations. Camels are used as load-bearing animals, and for meat and milk. They have a big significance for the local human populations which have relied on them in arid regions throughout much of human history.

Wild Bactrian camels are now critically endangered according to the IUCN. There are believed to be fewer than 1500 individuals over small areas of northwest China and southwest Mongolia. However, there are conservation efforts underway to save this rare species (find out more here).

When considering the question ‘what do camels eat’, it is important to first understand how they eat, and how they survive on so little in such extreme environments.

A camel’s upper lip is split into two halves which can move independently, making their mouths extra dextrous when plucking rough and often thorny plants from sparsely vegetated lands. Plants of arid and semi-arid environments have to be tough themselves in order to survive long periods of drought, and fluctuating temperature extremes from searing heat in the daytime to perishing cold in the night-time.

The inside of a camel’s mouth is also toughened to protect it from being damaged by thorns and woody stems. The Arabian camel also has hard pads on the knees and chest which help to shield it from the abrasive and scorching sand of the desert.

One of the most famous traits of a camel is its ability to retain water – they can survive for up to 10 months without drinking water, as long as the vegetation they find contains enough water to keep them going, incredible! When they access a water source, camels can take up vast amounts of water into their bodies extremely fast. Their system can cope with this dilution due to specially adapted red blood cells.

Other tactics camels employ to retain precious water include:

Now we know that camels are hardcore – able to survive extreme conditions that no other animal could through their incredible water storage abilities and awesome desert adaptions. But what do they actually find to eat in these desolate landscapes?

What do camels eat?

Camels can eat almost every type of vegetation they come across from thorny twigs to dry leaves. They will even consume saltbushes (woody shrubs that often form the main diet of desert-dwelling, large herbivores) and cacti! If they can choose, they prefer to eat vegetation which is more easily digested such as grass and grains. In some conditions where vegetation is not available, camels may become omnivorous and consume animal matter from carcasses and bones to fish. Let’s look at some elements of their diet in more detail…

If they have the luxury of choice, camels prefer to eat soft, easily digestible plants parts including leaves, buds, flowers and seeds. However, both Bactrian camels in the steppes of Mongolia, and Arabian camels in the deserts of Africa often cannot choose what they eat. Instead, they forage the woody, often thorny plants growing in these extreme environments. They even tolerate very bitter and salty vegetation that other animals are not able to digest.

Bactrian camels survive on the tough plants they find on the steppes, sometimes excavating plant bulbs and utilising an raw plant fiber they can find.

Arabian camels tend to spread themselves over a wide area when foraging and only take a small amount of leaves from each shrub. This benefits the entire desert ecosystem, allowing the shrubs to regenerate, providing food for camels and other desert herbivores into the future. It also benefits camels in terms of the ingestion of toxins – often, desert plants contain toxins and therefore the consumption of a considerable amount of toxic leaves can become a problem for a camel’s digestive system.

Camels have been observed eating carcasses they come across in the desert. They are able to gnaw on bones, sinew, skin and flesh, and derive nutrients from these materials. The camels which are kept in herds or trains by humans will opportunistically feed on scraps of food and leftovers from human meals. In more dire situations they have been known to consume any material they find in human camps from sandals to ropes, and even canvas material from tents!

Bactrian camels on the steppes of Mongolia have an incredible tolerance for salt. In fact, they have adapted so well to the salty conditions of the steppes that they now require high quantities of salt in their diet. They can often be found grazing near salt lakes, and drink brackish water directly. Mongolian camel herders will feed salt blocks to their domesticated camels during long journeys across the steppes. This forms an important component of a camel’s mineral balance. When salt is not available for Bactrian camels, they will quickly become emaciated.

Arabian camels possess reinforced, cone-shaped structures within their mouths called papillae. These protect the mouth from being spiked by cacti and other thorny plants, and help to shift the spines vertically down their throats, towards the stomach. It is still possible that the sharp spines may hurt them, but camels are hard-core survivors and will endure the pain to extract the goodness from cacti.

You may have seen or heard of camels eating peoples’ hair? There are many well-known video clips of camels chewing on or even ripping out and eating peoples’ hair. As we have mentioned, camels are opportunistic feeders – hair may not be their favourite food, and contains very little nutrients, but if given the opportunity they will try almost anything! In addition, hair may look like a form of vegetation to them which is why they will try to take a bite. Be warned – do not get your head too close to a camel’s mouth or you may get an unexpected haircut!

Camels in captivity will usually feed on hay, straw, grains, grasses, and leafy branches. As a treat, they will be fed fruit and vegetable. However, none of these nutritious food items can be fed to them in high quantities – food like this is too rich for an animal that is specially adapted to a low-nutrient diet.

Domesticated camels often require supplements, such as vitamin E and salt blocks, to keep their mineral intake in balance.

Foods camels do not eat

The food items camels do not eat is a much shorter list than the food items they do eat! As adaptable and opportunistic foragers, camels can survive the most extreme situations when food is scarce. But, as a rule, camels will not eat:

In terms of actually digesting the foods they forage, their rumination technique maximises the goodness they receive from plant matter. A camel’s multi-chambered stomach, glandular sacs and inhabitant gut microbes all help a camel to break down and efficiently digest anything they consume.

The link between food and a camel’s hump

In areas of abundant food sources, camels ingest and store food in preparation for harder times – this is where the hump comes in. A camel’s body processed the fats found in the food they consume and stores them as fatty tissues in the hump. When a camel does not have access to food, it can metabolise the fat to provide it with energy to keep going. As the fatty tissues are being used, the hump will reduce in size and eventually flop over once the stores are depleted. 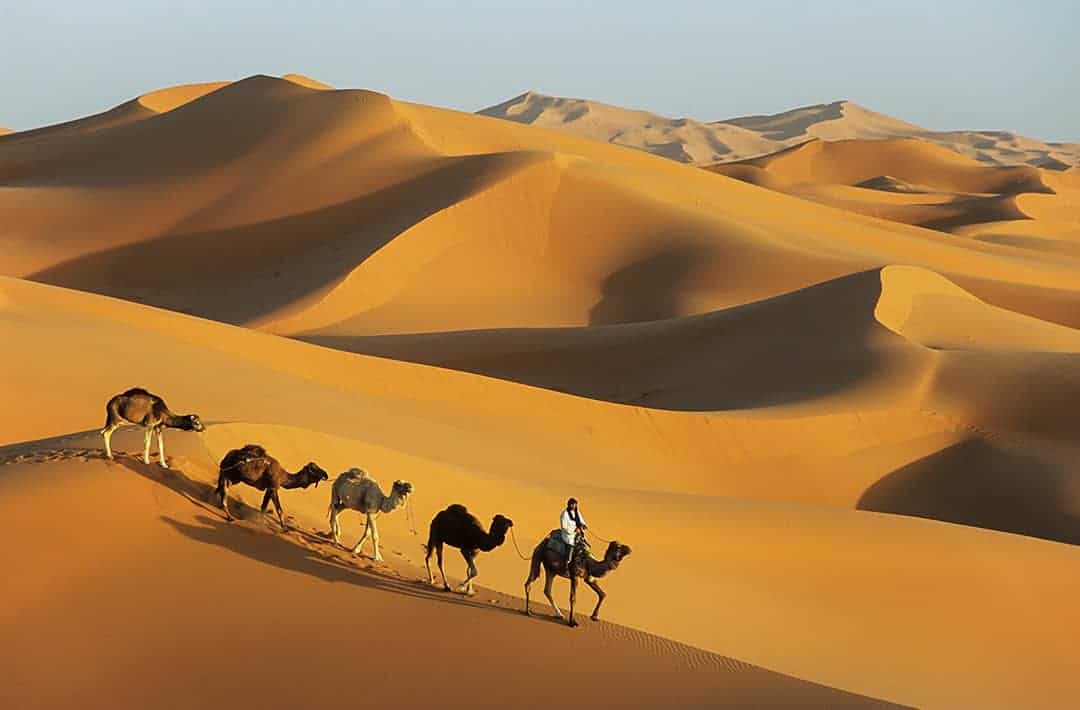 Their survival secret obviously lies in their impressive adaptability to the extreme environments they inhabit. From storing fats and water from the food they consume, to boasting remarkable characteristics that protect them from harsh temperatures and conditions, camels can surely teach us a lesson in endurance and fortitude.

Also Read: Animals With Multiple Stomachs: How Does That Even Work? (Camel is in the list)

Do Camels Eat Snakes? (Are They Poisonous?)

[…] to this source, this is widely believed in some parts of the world, despite there being no concrete evidence or […]