Iguanas are fascinating and majestic lizards, mostly herbivorous and highly adaptive, with a range of native areas (Mexico, Brazil, Paraguay, Caribbean) and a vast range of regions they have expanded into (Texas, Florida, Hawaii, Virgin Islands, Puerto Rico).

I said “Mostly herbivorous” because some iguana species are omnivorous, eating meat-based foods when they need to.

The iguanas’ diet consists of four categories of herbivorous food (greenery, flowers, veggies, and fruits) and only three or four categories of meat-based food (insects, mollusks, small mammals, and carrion); a pretty small menu, some would say.

Nonetheless, which species of iguana eats which type of greenery? Are iguanas one hundred percent herbivorous, and which ones have an omnivorous predisposition? Does a wild iguana eat the same food as a pet iguana?

Of course, not all types of food are suitable for all types of iguanas. In this article, we will find out what an iguana’s diet consists of, and its feeding habits.

Before we dive into the iguanas’ diet and culinary preferences, let’s see first what are we talking about:

A Short Introduction To Iguanas

Iguanas are the largest and the most spectacular looking lizards from the Reptilia class, with nearly forty species (Iguanidae suborder) spread in various habitats, from rain forests and watery habitats to deserts.

With a body length between 1.5 and 1.8 meters (tail included), the iguanas also distinguish themselves by the flap of skin underneath their chin and the ridge of elongated scales from neck to tail.

The iguana’s scale color varies depending on the animal’s environment, acting as an excellent camouflage and making the iguanas very hard to observe in the wild, even from a close range.

Compared to their carnivorous or even omnivorous reptilian relatives, the (mostly) herbivorous iguanas are a bit larger, have shorter muzzles, and broader skulls.

The iguanas’ skull has adapted over time to obtain, consume and process the vegetarian nourishment, developing a powerful bite and increased strength in the muscles involved with eating.

The General Diet Of Iguanas 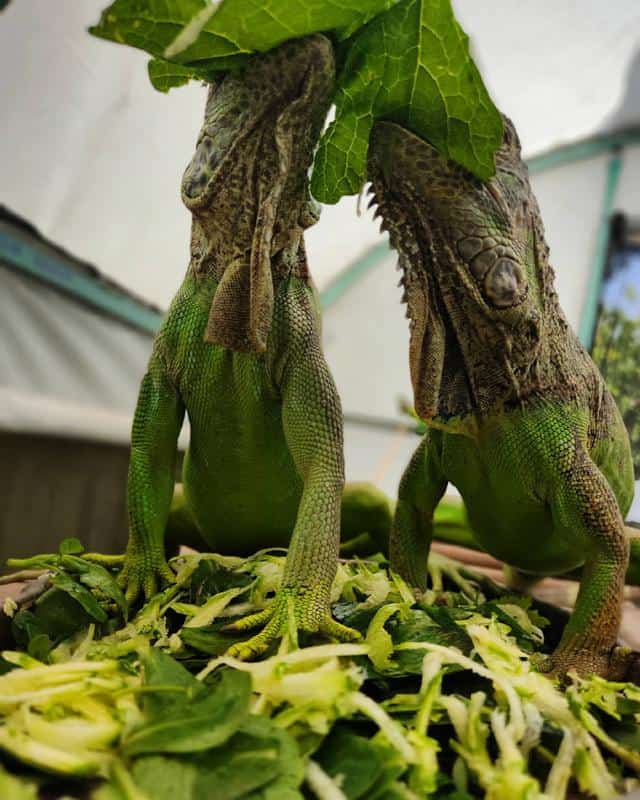 Iguanas are folivores, meaning they are specialized in eating leaves. They consume a wide variety of herbaceous plants, and the leaves and buds from almost any tree or vine they find in the wild.

From the enormous menu of vegetation that iguanas have access to in the wilderness, some of their notable favorites include divi-divi, gumbo limbo, yaya leaves, princess and season vine, fig-trees leaves, white manjack, pumpwood, snowy balloon vine, and rock rosemary.[1]

The iguanas’ diet requires a lot of calcium, so a pet iguana’s diet should consist of about 80-90 percent of dark-green vegetable leaves. 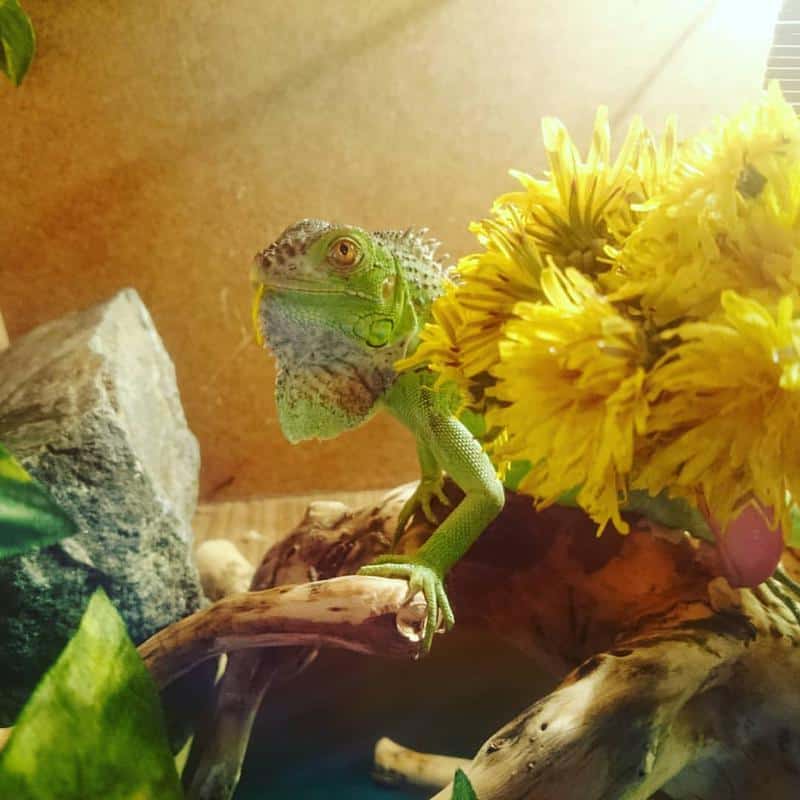 While in the wilderness, the iguana can enjoy any flower it wishes to, although these plant parts are not as nutritious as the leaves (especially the dark green leaves) .

Iguanas consume the flowers of most of the same plants from which they eat the leaves, as well as many other flowers, such as banyan, bodywood, poponax, liana del cuello, placa chiquitu, capança, hogvine flowers, desert willow, and bougainvillea, to name just a few.

In captivity, iguanas enjoy the edible flowers of roses, geraniums, carnations, nasturtiums, hibiscus, and dandelions, although the flowers should be given as treats and not as the a principal part of their meals. 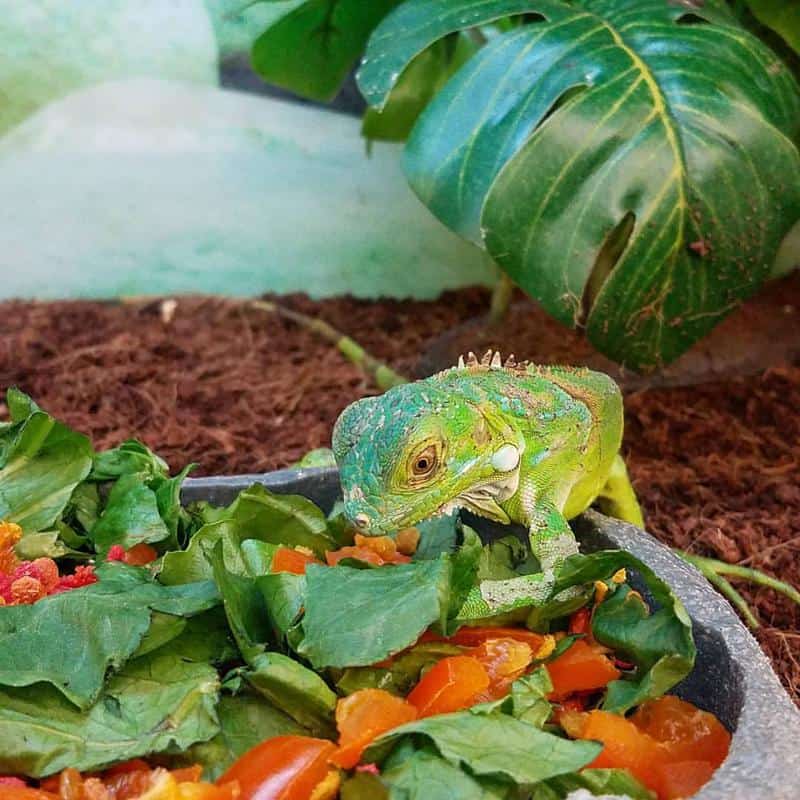 The best vegetables for iguanas are those we have discussed earlier, the dark-green leafy ones.

However, a second category of vegetables can be fed to the iguanas, to make up about 30-40 percent of an adult iguana’s diet.

As long as they have been squashed or made into a pulp, an iguana would happily eat mushrooms, carrots, parsnips, sweet potatoes, cucumber, asparagus, broccoli, green beans, corn, peas, and okra.

Some vegetables (spinach, chard, rhubarb, and beet greens), although rich in calcium, should not be  fed in excess to iguanas because they contain oxalic acid, which, in the iguana’s body, could cause a nutrient deficiency.

Other vegetables that can be given with abundance to iguanas are cabbage, kale, Brussel sprouts, broccoli, and mustard greens.

In the wilderness, an iguana’s feeding depends on the season – they do not have access to fruits all year round.

Even though iguanas love the delicious and juicy taste of fruits, they are not that rich in nutrients; thus, fruits should cover a maximum of 20 percent of an adult iguana’s diet.

However, the problem of oxalic acid remains, and fruits like figs, kiwi, and small berries should be given in small quantities and rarely.[2]

Although in captivity it is not advised to feed iguanas any type of animal protein, in the wilderness, most species of iguanas do not have a problem with tasting juicy meat now and then.

We are not talking only about the insects that iguanas eat, but some species will eat lizards, snakes, frogs, and even carrion.

Generally, they are not considered omnivorous, and in most cases, the consumption of animal matter is only supplementing their primarily plant-based diet.

However, if food sources are limited and the animals are desperate enough, they will eventually feed upon other small animals. 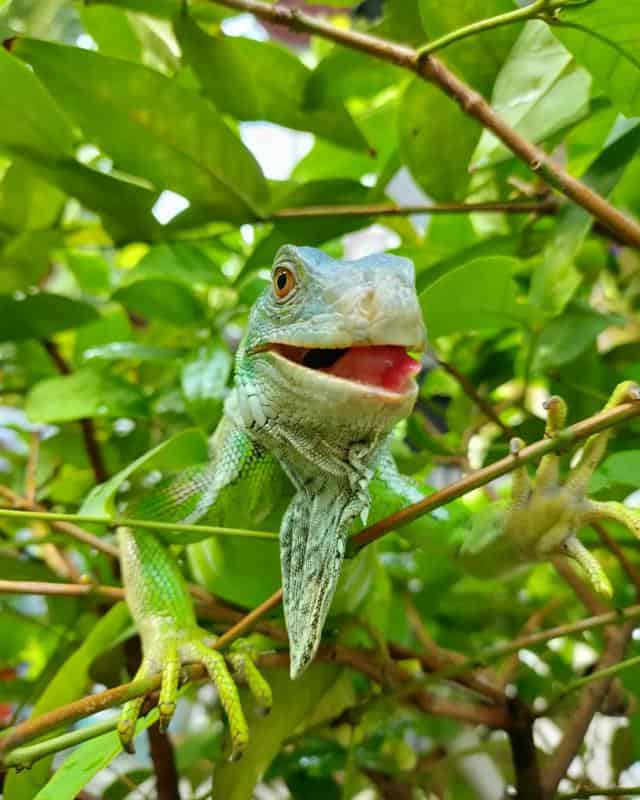 With a length reaching up to 183 cm and a weight of up to nine kilograms, the arboreal Green iguana is the most common in America.

It spends most of its lifetime in the canopy of trees, descending only occasionally when mating and laying eggs or when they relocate to another tree.

The canopies provide shelter and food for iguanas, and a large part of the lizard’s diet consists of leaves, buds, flowers, and fruits of plants like fan palms, firebush, nicker bean, jasmine, hibiscus, orchid, roses, and melons.

However, there are reports of adult Green iguanas feeding on birds’ eggs and carrion and young Green iguanas complementing their diet with insects and tree snails.[4] 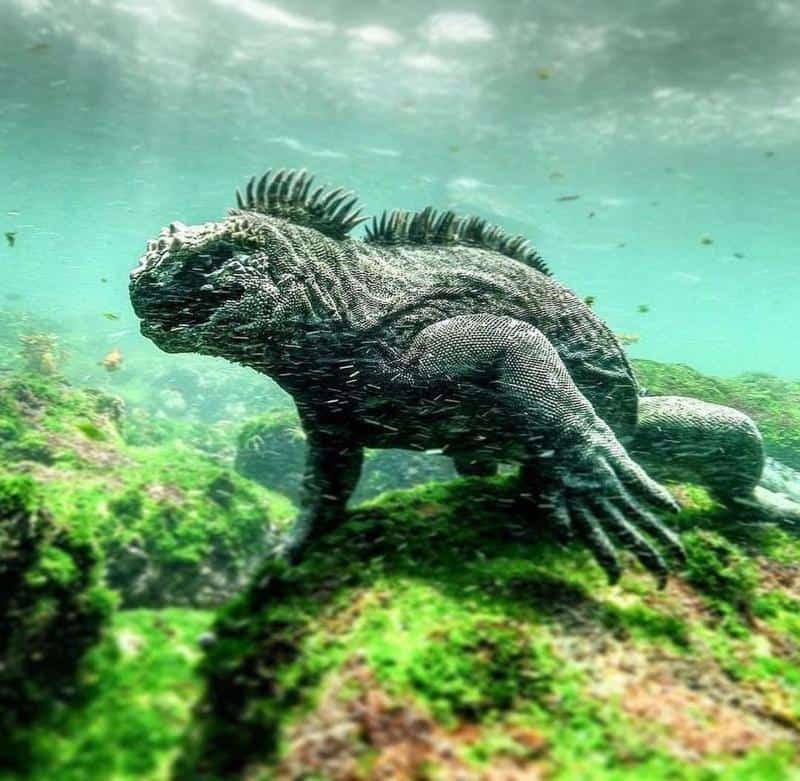 The Marine iguana looks like a miniature Godzilla, with an average length of 1.3 meters for males and 0.6 meters for females, weighing around 5 kilograms.

This unusual iguana is even more intriguing due to its feeding habits: it is the only reptile that feeds in the sea, thus making it the only species classed as a marine reptile.

The Marine iguana can dive up to 30 meters deep and stay underwater for up to one hour; this is plenty of time and space to forage for algae growing on underwater rocks near the shore.

Nonetheless, observations of the Marine iguanas have revealed that these mini Godzillas have no problem feeding from time to time on grasshoppers, crustaceans, and even sea lion newborns.

Moreover, the Marine Iguana will feed on feces (of other iguanas, sea lions, or red crabs) in desperate situations.[5]

In the Sonoran and Mojave deserts lives the Desert iguana, a medium-sized lizard, which is exceptionally tolerant to the high temperatures of the desert. It is most active in the summer noon, preferring an optimum temperature of around 40 degrees C.

Even if the Desert iguana spends most of its time sun-bathing and eating, it is distinctive due to its ability to raise its body high from the ground while walking or running, and travelling at high speeds. It will sometimes run bipedally!

The lizard consumes most of the plant material (buds, leaves, flowers), but in the spring, it prefers the yellow flowers of creosote, which is its favorite bush. Interestingly, they seem to prefer yellow flowers in general.

The Desert iguana will occasionally eat insects, arthropods (like crickets), and mealworms; in captivity, an appetite for yellow mealworms has been observed.

Also Read: What Do Mealworms Eat? (With Pictures And Video) 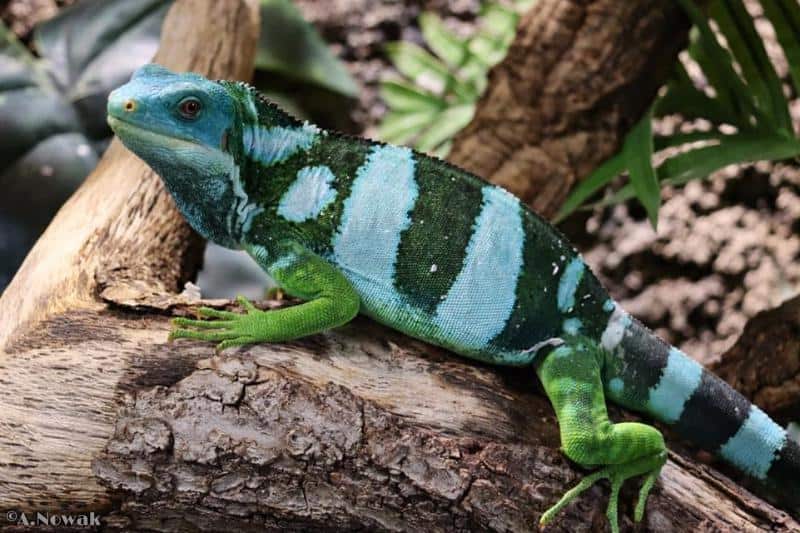 The Fiji Banded iguana got its name from its place of habitat (the Fiji Islands); it is one of the few iguanas species found outside the New World.

Although a great climber (and swimmer!), the Fiji Banded iguana only climbs into the tree canopy at night to evade night-time predators.

Otherwise, it will actively feed in the daytime on the forest ground, consuming almost all plant materials.

But even the beautiful Fiji Banded iguana is not a complete saint when it comes to animal protein – it has been observed to eat small insects on rare occasions. 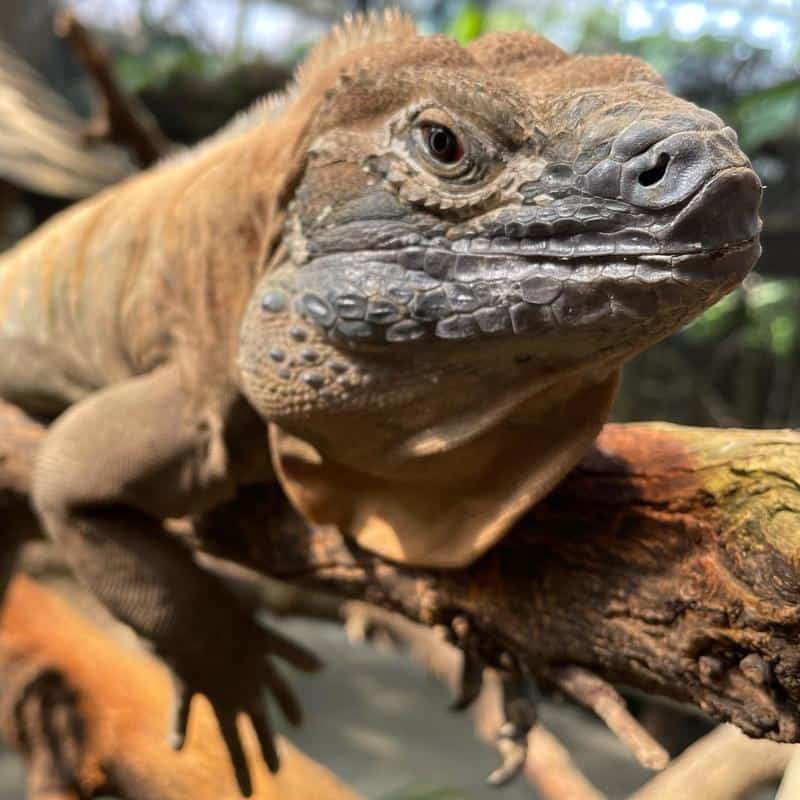 The Jamaican iguana is a giant lizard, the most massive land animal in Jamaica. It was declared extinct from 1948 to 1990 until a small population of about 50 Jamaican iguanas was discovered in the wild.

The Jamaican iguana is still considered endangered – it is believed there are no more than a couple of hundred of them in the wild at present.

Like all iguanas, the Jamaican iguana’s diet consists mainly of the leaves, flowers, and fruits of over a hundred plant species.

This feeding behavior and food variety make the Jamaican iguana a vital seed disperser for many species of plants and trees. It therefore plays a crucial role in maintaining the forest’s structure and diversity.

Nonetheless, feces’ analysis has shown that Jamaican iguana also feeds on small insects and snails. It is unclear whether the animal supplements its vegetation diet purposely, or eats the insects and snails accidentally whilst feeding.

The Rhinoceros iguana is a chubby-looking lizard which gets its common name from the three horn-like knobs on the snout of the males. It is also endangered, and lives on Haiti and the nearby islands.

The Rhinoceros iguana is more terrestrial than other iguanas species, mainly living in dry, stony areas and rarely seen in forested regions.

Like other iguanas, the Rhinoceros iguana feeds on plants material (leaves, flowers, fruits), but what’s interesting is that the seeds ingested by this lizard seem to germinate faster than those that do not pass through the its digestive system.

Unlike the other iguanas,  the Rhinoceros iguana is an opportunistic carnivore, some individuals consuming insects, small lizards, and small snakes.

All iguanas have a vegetation-based diet, consuming all the plant material they can find from a wide variety of plants. Each species’ diet depends on their habitat and feeding adaptations.

Some iguanas’ feeding habits make their species essential engineers of the habitat structure and diversity, spreading seeds and even improving the germination of seeds through ingestion and excretion.

Some vegetables and fruits contain oxalic acid that could be harmful to iguanas; thus, it’s recommended that some should be fed very occasionally (cabbage), while others shouldn’t be fed at all (avocado).

While it is not advised to feed pet iguanas protein-based food, some wild iguanas species eat meat. Whether it is a purposeful supplement to their herbivorous diet, influenced by hunger, or ingested accidentally, various species of iguana will consume protein sources including: insects, eggs, small lizards and snakes, small birds, and carrion.